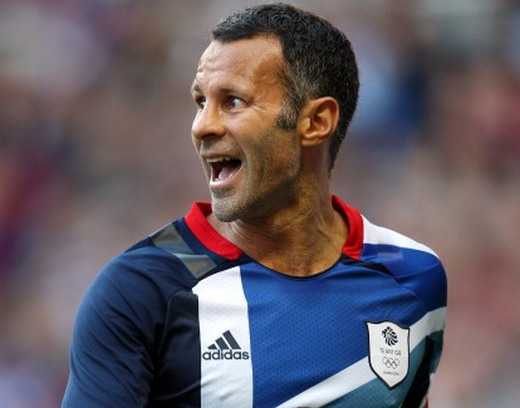 RYAN GIGGS has admitted it will be a strange experience when he leads out Team GB at his beloved Old Trafford tomorrow night.

The Manchester United star will be repeating the trick of leading a side other than his club team after captaining Wales against England in the 2-0 defeat at Old Trafford in October 2004.

Almost eight years on, at least Giggs will be technically captaining a home side at Old Trafford where they face Senegal.

“It will be strange, but I have done it once before, when Wales played England here,” said the veteran midfielder.

“It was strange that day because we were in the away dressing room, but fortunately we are in the home dressing room this time. It will be different for me.”

It will be Giggs first major appearance in tournament football at the age of 38.

“I’ve enjoyed every bit of the preparation so far. To be involved in a tournament at this point in my career is something I am excited about.”

Giggs has won almost everything in the game, but would cherish an Olympic gold medal.

“It would be up there, definitely,” he added.

“I don’t like to prioritise any trophies or medals because they are all good feelings, it’s always a challenge no matter what you have won before. This is a big challenge because of the quality that is there in the tournament.

“As a footballer you don’t start off thinking you’d like to win a gold medal in the Olympics, you set out to win leagues and cups and European cups and hopefully we’ll get the chance to go a long way.”

Team GB coach Stuart Pearce believes the Olympic football tournament is in danger of being underestimated.

Those who remain unconverted to the idea of football being part of the sporting extravaganza about to unleash itself at London 2012 would have had all their pre-conceptions underlined at Old Trafford yesterday afternoon.

A grand total of only seven reporters, plus a BBC crew, were in the Europa Suite as Pearce, accompanied by skipper Giggs, looked ahead to GB’s opening match against Senegal tomorrow.

The press conference itself had been brought forward by 24 hours to allow for greater coverage of Hope Powell’s women’s side, who open the entire Games in Cardiff today.

Greeted with scores of empty seats, Pearce smiled and said: “We could have done this in my bedroom.”

Whilst a communication breakdown may have been responsible for the lack of numbers, the turnout was almost in keeping with the way GB’s participation is being viewed by so many.

For them, football is about England, Scotland, Northern Ireland and Wales, not a made-up team in an event more usually associated with athletes, swimmers, cyclists, horse riders and other sports who, however briefly, get to enjoy the kind of attention bestowed on the round ball game for the rest of the year.

This view rather ignores the fact football has been an Olympic event since 1900 and amongst its gold medallists Lev Yashin, Samuel Eto’o, Carlos Tevez and Lionel Messi.

Seventy thousand people have been enthused enough to get themselves tickets for tomorrow’s game, the second part of a double-header that also includes tournament heavyweights Uruguay taking on United Arab Emirates.

And Pearce feels those at the game, and the ones watching on TV, are in for a shock.

“If I roll the clock back a calendar year, I was fortunate to go with England to Colombia for the Under-20s World Cup.

“We played a group match against Argentina in front of 44,000 people. The standard was fantastic, the tournament and the exposure were fantastic. Very few people in England knew there was a tournament going on.

“That is how we underestimate tournaments.

“The same will apply to the Olympics.

“Once it gets started and they see the magnitude of the teams, the professionalism and the standard of football they will see, they will sit up and take notice.”

Pearce certainly gives off the vibe of someone keen to do well.

And he positively bristled at the suggestion the women’s game has far more to gain from their Olympic experience.

“I find it quite sad if it was viewed that way,” he said.

“Every individual who has the opportunity to participate in this Olympics will come away a better player for it.

“We also hope that the fans come away from the games having enjoyed a great game of football.”

A successful tournament would help, and that probably means getting a positive result tomorrow as it is widely expected UAE will end up bottom of the group and Uruguay, who include Luis Suarez and Edison Cavani in their squad, will reach the last eight.

Pearce watched Senegal – who include West Ham new boy Mohamed Diame – win their play-off with Oman at Coventry and noted a physicality that has been borne out by three subsequent warm-up matches.

“We know quite a bit about them,” he said.

“They are a strong, physically athletic side, who counter-attack very quickly.

“They are going to be a tough nut to crack.”