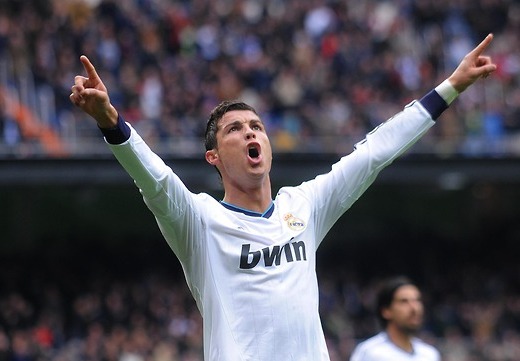 Cristiano Ronaldo says he wants to play on for 'ten more years' - but is unsure he will be able to emulate former Manchester United team-mate Ryan Giggs by carrying on with his 40th birthday on the horizon.

Giggs has enjoyed a sparkling career at Old Trafford, and Manchester United boss Sir Alex Ferguson has previously revealed the Welshman will play on next season, which would make him only the third outfield player to reach his 40th birthday and still be turning out in the Premier League.

Ronaldo played alongside Giggs during his time at Manchester United before he left to join Real Madrid in 2009.

Speaking in a wide-ranging interview with Spanish newspaper AS, Ronaldo says he wants to play on for 'ten more years' until he is 38, but admits that he may not be able to emulate Giggs' achievement.

“It’s a difficult question to answer [about copying Giggs], because I do want to play for 10 more years, but I do not yet know if I can get to 38," he said.

“I want to play many more years and I will if I feel good mentally and physically. I can work towards this because I have good genes. There should not be issues in trying to achieve it.

“They say that after 32, 33, your genetics change and so does the way you play, it slows you down, but you gain in experience. I enjoy this time, which is very good.”

Ronaldo had his say on a wide-range of topics during the interview, and spoke of comparisons with Real Madrid great Alfredo di Stefano as well as his improved relationship without the Bernabeu crowd.

“It is an honour to be compared to the greats of football and Madrid," Ronaldo said of Di Stefano, whose record of 100 goals for Los Blancos in 87 games he matched. "It is an honour to be next to these men, but to me I am concerned about working to help my club to become better.

“I do not think of comparisons or records because that is not good. What is true is that I always try to make people love me.

“I want to make my mark at Madrid and I will only do that if I defend the club until the end of my tether.”

Of his relationship with Madrid's fans, the forward said: “This situation makes me very happy. I’m excited for the love of the people on the field, in the street. I am proud to see that people are behind me, because they have realised that Cristiano is always the same.

“I always compete. I always give my all and the fans have realised. The Bernabeu appreciates me and see me as their player, at home.

“What motivates me is seeing that people care for me and continue to support me in all games, whether I score or not.”

Real Madrid currently 16 points off Barcelona in La Liga, with their hopes of defending the league crown they won last year all but gone.

Ronaldo says the target is now to secure Madrid's 10th Champions League crown, which he says would be the ideal present to mark his 28th birthday yesterday.

“The first gift I would ask for is the Decima [10th European Cup], something very special for Real Madrid after so many years without winning it and, of course, it would be also for me,” he reflected.

“The Champions League is the most for a player and to win it excites me a lot this year. I’ve been playing for 10 years as a professional and I am proud of what I have accomplished.

“I have many challenges ahead. The Champions League and Copa del Rey with Madrid, because we know the League is very complicated.”