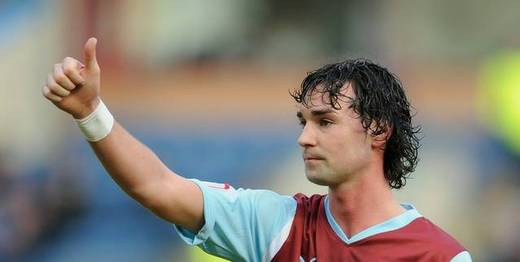 Burnley wideman Chris Eagles admits he needed a friendly word from pals Ryan Giggs and Wes Brown to get his season on track.

The former Manchester United saw his form dip as talk of a move to Everton escalated leading up to the January transfer window.

So Eagles had a chat with his United friends to work out how to regain the form which brought an impressive six goal return by mid-October.

He said: "The transfer talk was a nice distraction but it was a distraction.

"I didn't know what was happening with Everton and it was an up and down situation. I wanted it to pass.

"Ryan and I live in Manchester and I see Wes all the time, he's one of my close mates and they talk to me about what's going on.

"In January, I needed people to talk to and they were the only people involved in football that I could speak to as a friend.

"They said, 'It's good but just keep your performances going and if it happens, it happens."

Eagles return to form has coincided with Burnley snatching five wins from their last six matches as they get ready to face Millwall today.

It's a run that has put promotion firmly back on the agenda but Eagles is not sure whether he will be around next season.

He added: "Whatever the summer holds, who knows? I expect there will be more talks with other clubs but I'm concentrating on Burnley."

Eagles has now taken his tally for the season to 11 goals and admits he's getting plenty of attention from Championship defenders.

"I'm expecting it,'' he said. "So if I get a whack, I won't be too shocked. It's nice to have someone kicking you as it shows their manager has targeted me.

"I handle it better now. When I was young, I lost my temper a lot and didn't know how to handle it.

"Now I'm smiling with it as it helps them lose their head a bit more. I had it in the youth team at United but there's a big difference between getting a whack from a man and someone your own age.

"Ronaldo still does get it and I've always respected what he's done. He found it tough when he came to England but he's one of my idols.

"Now if you watch him, he bounces off them."