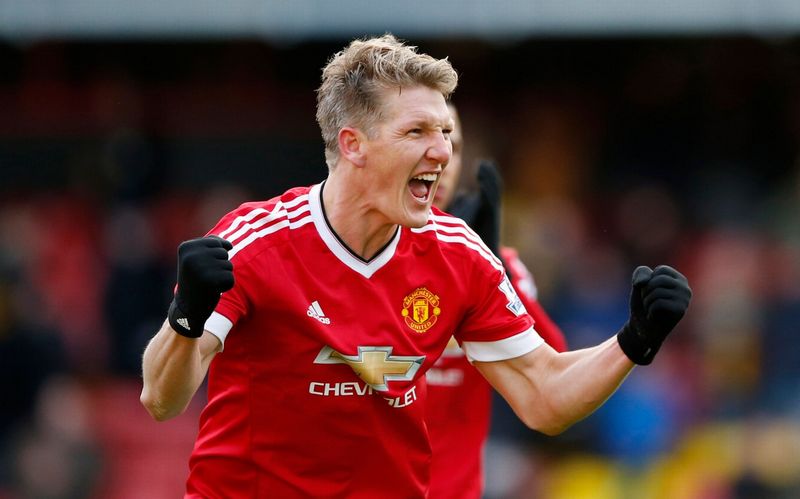 Despite a raft of injuries, picked up before and during the visit to Watford, Manchester United earned a dramatic 2-1 victory at Vicarage Road with Memphis Depay scoring on his return to the side and Bastian Schweinsteiger playing his part in an injury-time winner.
In a game dominated by Louis van Gaal’s men in the first half and controlled by the Hornets in the second, Memphis's fine first-half goal and an own goal from Troy Deeney, who had equalised for Watford, secured a vital win and, at least temporarily, took United top of the table. David De Gea’s part in the win cannot be overlooked either after a string of top saves from the Spanish stopper.
Van Gaal made four changes to the side that started the Reds' last match against West Brom, with Phil Jones, Morgan Schneiderlin, Ander Herrera and Memphis all coming in. They replaced the injured pairing of Michael Carrick and Anthony Martial, Wayne Rooney, who is ill, and Marcos Rojo, who was named on the bench after a long journey back from South America for international duty. After recently including youngsters Axel Tuanzebe and Cameron Borthwick-Jackson in his matchday squad, van Gaal named two more prospects among the substitutes - striker Marcus Rashford and midfielder Sean Goss.
Another homegrown talent who has impressed so much in recent weeks, Jesse Lingard, got United on the attack from the off, and was inches away from connecting with Juan Mata’s right-wing cross with just a minute on the clock. And it wasn’t long before the Reds took the lead. The danger came down the right once more as former Watford man Ashley Young found Ander Herrera and his first-time cross was brilliantly volleyed into the top corner by Memphis.
United were well in control of proceedings but breathed a sigh of relief on 21 minutes when Young had the ball taken off his toes by Etienne Capoue who sprinted forward. Watford found themselves with two against one as Capoue found Odion Ighalo, but the striker shot wide.
The Reds lost Herrera to what looked like a hamstring injury soon after, with Rojo coming on to join Chris Smalling, captain for the day with Rooney and Carrick both out, and Phil Jones in a makeshift back three. Not long after coming on, Rojo sent a ball into the box which bounced around before eventually dropping to Schneiderlin who smashed a volley just over the bar.
The French midfielder went close again just after the half-hour mark when Bastian Schweinsteiger flicked a corner across the box only for Troy Deeney to acrobatically flick it away to prevent Schneiderlin tapping home at the back post.
Memphis almost doubled his and United’s tally for the day six minutes before the break when he took aim from 25 yards, but Heurelho Gomes got down well to push it clear.

Possession: Watford 40% United 60%
Shots at goal: Watford 2 United 4
Shots on target: Watford 0 United 2
Corners: Watford 1 United 4
Gomes was called into action straight after the restart when Capoue presented Memphis with possession in midfield. The goalscorer powered forward and slipped a reverse pass in to Lingard whose shot was well saved by the Watford keeper.
Thereafter, Watford took control with De Gea needing to be on red alert on more than one occasion. Four minutes before the hour mark, Watford put together their best move of the game as Deeney caught the ball brilliantly on the edge of the box after being set up by Ighalo but De Gea pushed it clear. The United goalkeeper then had Schneiderlin to thank minutes later when he blocked Ighalo’s effort from five yards out. 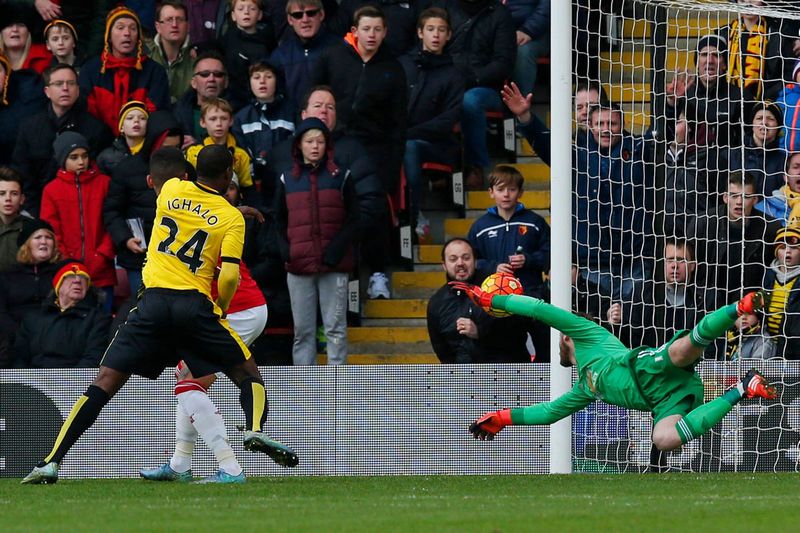 Watford continued to turn the screw and De Gea made two superb stops in quick succession after the Reds had lost Jones to what appeared to be yet another injury. The Hornets got the ball into the box and after it had pinged about, Almen Abdi had a go but De Gea got down brilliantly to tip away after it had deflected off Smalling. He then palmed away the resulting corner from almost inside his goal. Lingard had a chance to seal the victory seven minutes from time but wasn’t able to lob Gomes as he advanced from goal. It looked to be a crucial miss when Deeney levelled proceedings from penalty spot after Rojo tripped Ignalo three minutes from full-time. Referee Robert Madley took some time before making the decision and Deeney made no mistake by lashing past De Gea. 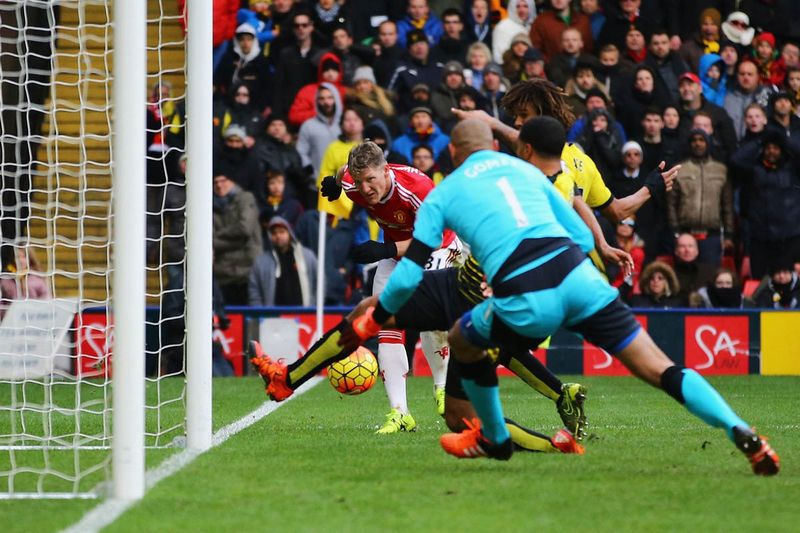 Yet, there was still more to drama to come in injury-time. United piled on the pressure and, after Gomes had saved spectacularly from Smalling, he could only palm Lingard’s shot into the path of Schweinsteiger who sent the ball back across goal for it to be turned home by Deeney, as he tried to scramble off the line. Cue wild celebrations from the Reds and another important three points. 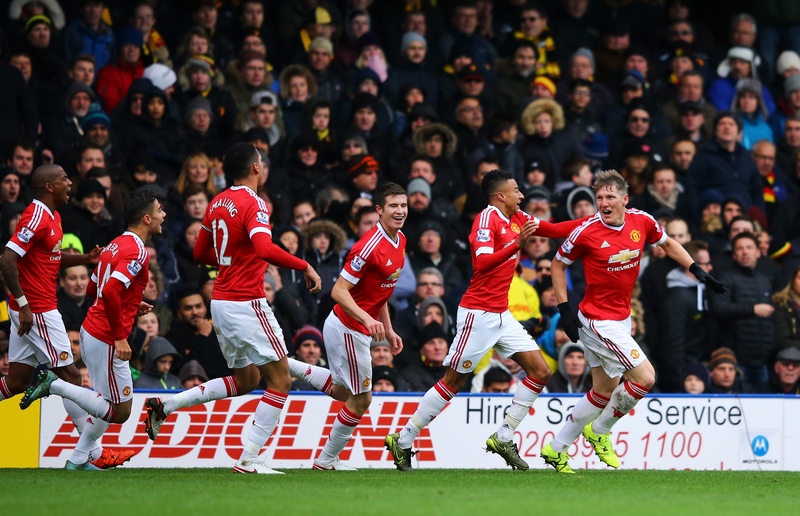 David De Gea once again played a crucial role in securing the points for United with a host of top saves at vital moments at Vicarage Road. He was powerless to stop Troy Deeney's penalty, but he romped the Man of the Match poll with 78% of the votes, ahead of goalscorer Memphis and former Watford player Ashley Young.

Louis van Gaal: "I was amazed at the spirit in our team. We had the late penalty but, as a team, we created another three possibilities in five minutes after that. When you can do that as a team, then I am a very proud manager."

Bastian Schweinsteiger: "It would be nice if it was my goal but I know that the Watford player touched the ball so, for me, it doesn’t matter. We won the three points and that’s the most important thing. The goal meant a lot to me because these sorts of games can make the difference at the end of the season."

Memphis Depay: "I enjoyed the goal a lot, of course. I like to score goals. It was important for me to score a goal when I got a chance. I was happy. It was a nice moment [to celebrate with the fans]."

Ashley Young - ‏@youngy18
Great being back at Vicarage Road today, thanks to all the @WatfordFC fans for the warm welcome. Big three points for us and team spirit. #mufc
David De Gea - ‏@D_DeGea
If you fight until the end, you end up finding a reward! C'mon @manutd.
Phil Jones - ‏@PhilJones4
Very important 3 points today in a tough game. Big game ahead at Old Trafford Wednesday night! @ManUtd
Ander Herrera - ‏@AnderHerrera
What a team spirit! 3 fantastic points, I hope the injury is as small as possible.
Juan Mata - ‏@juanmata8
Not the prettiest game, but 3 very important points straight after the international break! @ManUtd #teamspirit
Bastian Schweinsteiger - @BSchweinsteiger
What a dramatic end of this match. So happy about our last-minute victory! #mufc
Marcos Rojo - ‏@marcosrojo5
Happy with another victory! #ManUnited #RojoIsRed
Wayne Rooney - ‏@WayneRooney
Well done today lads big 3 points. @BSchweinsteiger congrats on your 1st goal.
Rio Ferdinand - ‏@rioferdy5
What a result for @ManUtd ....late winner...could this be the catalyst to go on a major march towards the title....??
Gary Neville - ‏@GNev2
Yesssssssssssss get in!!!!

Despite a raft of injuries, picked up before and during the visit to Watford, #MUFC earned a dramatic 2-1 victory at...