Ryan Giggs admits it is 'crazy' how he still manages to maintain his motivation for the game after winning a record 13 Premier League titles.
About to start his 23rd season as a Manchester United player, the 39-year-old was given a one year contract extension by Sir Alex Ferguson last year.
As Red Devils players and staff arrived in Sydney to continue their pre-season tour, Giggs said he was enjoying life at the club as much as he did when he started off. 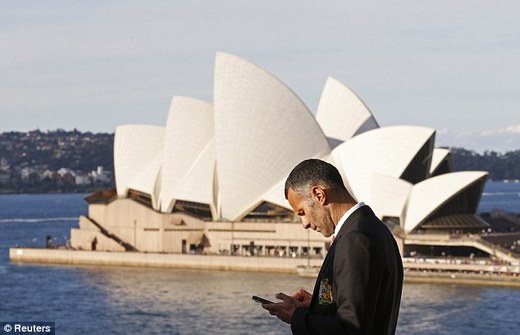 Giggs inspects his phone after taking a picture of the Sydney Opera House
'Crazy, aren't I?' he said.
I'm enjoying it just as much as I did 20 years ago. It’s as simple as that. Every year is a bonus to me. Take last year: winning the league, that feeling you have after the hard work you put in... winning that trophy makes it all worthwhile.
'The thing about Manchester United is you have to do it all over again. This is the start of the journey this season and I hope to be lifting a trophy again at the end of the season.
'We have to put the hard work in now in order to achieve that.  I'm enjoying it more than ever.' 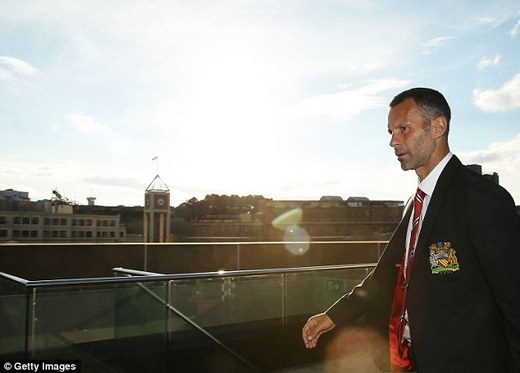 Giggs arrives for the Manchester United press conference at the Museum of Contemporary Art
He was expecting the pre-season campaign to be gruelling; United lost 1-0 to Singha All-Stars in Moyes' first game as United boss on Saturday.
Giggs said: 'Pre-season’s a tough time for the players. You’re just getting your fitness up so it’s hard to play against a quality team. But we're looking forward to it in a full stadium. We hope to improve on last night's performance and result. We’re all looking forward to it.
'We're here for a long time – it’s our longest stop on our pre-season tour – so it's a balance between working hard and a bit of down time. I'm really looking forward to working hard and then also seeing the sights of Sydney. We’re in a great spot and I’m looking forward to the rugby league on Wednesday. 'But it's all a lead-up to a big night on Saturday.'
By rugby league, he was referring to the State of Origin clash that some Manchester United players are heading to watch in the week.
This is the third game in a series of rugby league clashes which are considered to be Australian sport's greatest rivalry and will take place on July 17.
Giggs said: 'I'm looking forward to it. I'm a big rugby league fan. I had the great pleasure of spending some time with Melbourne Storm when they were playing in Leeds in the World Cup Challenge.
'I spent some time with Billy Slater and Cameron Smith, who are Queenslanders. I've also had a text off Andrew Johns telling me in no uncertain terms who I need to support on Wednesday. I’m in Sydney so I'll be supporting New South Wales!' 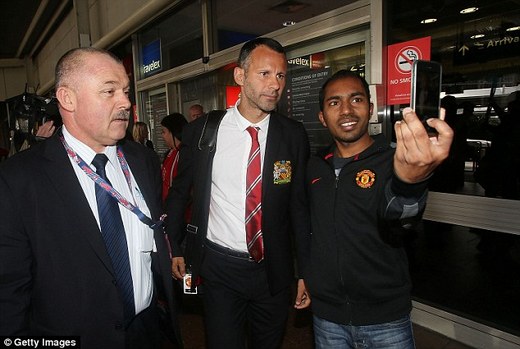 Giggs poses for a picture with a fan at Sydney International Airport
Giggs has a rugby league background too - his father Danny Wilson used to play for Wales, Widnes and Swinton among other sides.
The Welshman says he is enjoying life after Sir Alex Ferguson at United but also admits that the change from normality is strange.
He said: 'It's obviously strange. I've only had one manager for 20-odd years. But we move on and I'm really enjoying it. Like any pre-season you have to work hard and prepare yourself for the first game of the season.'
Moyes, meanwhile, was thrilled to return to Australia after visiting for the first time a few years ago.
He said: 'I'm very pleased to be back. I came here about three years ago. You always enjoy the first time but I think you need to come back a second time to really see the sights. So I'm looking forward to having a look around but I’m also looking forward to the game - it should be a big crowd and a good night.
'There's no reason for Australian football not to become a major league itself. It's a big country and it could have a big pull for players from Asia. Qualifying for the World Cup is a great thing for the country – it really is – and it gives all the football supporters over here something to look forward to.'
He continued: '[Coming to Sydney] is a big part of our preparations, coming here. We're looking forward to a good week's training. The way the tour works out, this is our longest stay.  So we'll use your fine facilities to try and pick up the training a little bit and get prepared. Fortunately, Robin will join us here in Sydney, which will help us a lot.
'Wayne has gone back and it looks like a two to three week injury - nothing too severe. We have got a busy schedule when we go back as well, so if we can get him fit for that then we’ll be pleased.
'Wherever you go the games are really tough. We found that last night in Thailand. We had travelled away and it was the first game for our players. This Saturday will be the second game. I’m sure the Aussie players will be a bit more in full flow than we are. I think when you play Manchester United everybody wants to beat them. The players who have been here for a few years understand that's part of playing for Manchester United.
'Every game for Manchester United is important. But I've also got to say the most important one is when we go back and we start the season against Swansea City. That's the real one we want to get ready for.
'But we want to do everything we possibly can to show you how good a team and a football club we are. I know some of the Australian players from the past. 'Tim Cahill was one of my players.  Obviously he’s not playing this game but I know their qualities. I also I know Lucas Neill from when he had a short spell at Everton. I’ll sure they’ll be up for the game. If you're picking the best from the A-League then we know it's going to be a big test for us.
The objectives for the season are probably no different from what any Manchester United objectives would be: to win as many trophies as possible.
'It's my first season as manager and I'm following probably the finest football manager that’s ever lived. If I can even win a quarter of what he won I'll have done very well.
'The first thing is to settle in to the job, get to know everybody and find my own way around. I’m really fortunate that everybody working at the club is making that easy for me.
'The players, especially, have been terrific with what they’ve been doing. And we’ll be adding one or two players who have been away with their international players in the summertime in the next month or so.
'You're always likely to pick up one or two knocks and niggles. But we've got players who are starting some training back home in the UK. Ashley Young’s started some training, Chris Smalling has started some light training and Nemanja Vidic has started. So we do know that if we do need them we can probably call on them.
'My preference was to come with a smaller squad because I wanted to make sure I got as many players playing minutes as possible. I didn’t want to bring players who would travel halfway around the world for three weeks and end up not playing enough games. So I wanted to focus on getting as many players as much time as they could.
'For example, last night, several players played the full 90 minutes. It’s always good to get the first one under your belt – you feel much better about things. That will be the case on Saturday: some of them will certainly play a full 90 minutes in the game.
'I managed a very good club at Everton and we had great support out here - we visited Sydney, Melbourne and Brisbane and enjoyed that - but I have to put this into perspective and it's completely different. The amount of support we've had, the amount of interest from the press... we're constantly watched and scrutinised and it's something I'll have to come to terms with.
'But the previous manager, Sir Alex, told me what to expect. He told me especially what the tours were going to be like and I think if you have a football club like Manchester United you have to make sure you go to your supporters worldwide and I think as a football club Manchester United do that very well.
'They take the club around the world and try and engage with the supporters wherever they are.'