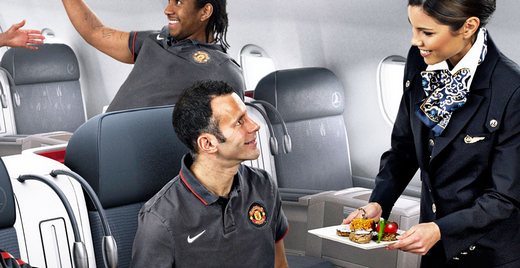 The studio has also just released a peek behind the scenes images at www.taylorjames.com/turkish-airlines , so you can see how the project took flight, with exclusive on set pictures with the players and a step-by-step look at how the image was crafted.

The main advert shows players enjoying the in-flight entertainment of a Turkish Airlines first class cabin, from Park on an interactive games console to the unconventional on-flight past-time of keepy-uppy by Anderson and Berbatov. Without a real plane to shoot, Taylor James’ expertise was able to produce this striking image by combining CGI and photography with creative direction and retouching under one roof. It is this expertise and ability to work equally with such diverse techniques that enables the studio to deliver innovative solutions to clients wishing to present unique creative imagery that suspends disbelief.

The brief required the inside of the plane to be built entirely in CGI, with the players to be photographed and later integrated into the scene. Josh Rogers, Taylor James’ retoucher and creative lead, said:

“Logistically, the inside of the plane would not have been easy to shoot. With such limited space, the process within the actual environment would have been time consuming and cost-prohibitive for the client. We also only had a short time allocation with each player. We therefore built a 3D environment in 3ds Max, referencing detailed blueprints of the interior of the plane provided by the client. In order to maintain continuity, we created the CGI scene setups before the shoot in Manchester, so that detailed camera, lens and scene measurements could be followed.”

The final layouts demonstrate the level of photorealism that can be achieved in 3D, when the execution is finely controlled. Rogers worked alongside Lindsey J Hopkinson on set, a regular photographer for the studio who has a portfolio of sports star work under her belt. Their expertise was essential to plan and capture the necessary shots to be integrated with the CGI environment. There were key initiatives that ensured the shoot was successful, as Rogers explains: 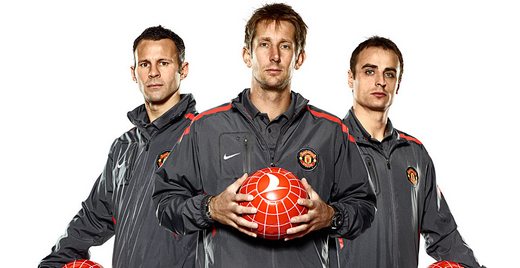 “The most crucial part was the day before the players actually came on set when we were able to have a pre-light shoot. With the CGI models as place-markers, we were able to set everything up to the exact measurements of the plane, ensuring that the POV (point of view), lenses and lighting were consistent throughout the shoot.

“We also had an iPad working remotely on set to sync to the raw files as they were captured. This was not only helpful for the client as it allowed them to give instant image approval on set, but it also allowed us to show the players when they had to make slight adjustments to their position if needed. At one stage, I went over to Giggs and showed him a photo of him with the air hostess, and he said “I don’t look very happy with that meal!” which helped illustrate that he could smile more in the next shot. With such careful choreography, we were able to capture two poses for every player in less than forty minutes.”

Being able to combine photographic portraits with a virtual CGI environment was crucial in achieving the realism required to meet this complicated brief. Taylor James has paved the way in creating photo-realistic stills and animation to the highest standards for over a decade and was not afraid of the challenge. Breaking through the smoke and mirrors that can be found in the 3D world, the studio is well known for openly sharing details of how images are constructed and have released the ‘behind the scenes’ story on their website, www.taylorjames.com/ turkish-airlines/

Once the CGI render passes were completed, retouchers took on the task of integrating the images. Rogers continues, “It was important that we were aware of where the player’s body parts interacted with the interior of the airplane and in each instance created a variety of shadows to fully integrate them within the scene. The final stage was colour grading, it needed to look modern and friendly but ultimately realistic. Selective masks of each element within the cabin enabled us to fully control the colour, mood and focus.”

Having handled the completed production, Taylor James had the flexibility to push the creative aspects and reach a top quality result whilst efficiently allocating resources. This campaign is a strong example of the key benefits an innovative and cross-disciplined creative production house can offer in bringing a concept to life.