When Ryan Giggs met Radamel Falcao at Manchester United’s training ground on Monday night, he intended that his first words to the expensively acquired newcomer would be instructive.
“Congratulations,” he was going to say. “Welcome to the best club in the world.”
Despite the weight of recent evidence, despite finishing seventh in the Premier League last season, despite beginning this with a stutter, a stumble and a 4-0 humiliation in the League Cup, Giggs is convinced he was not being hyperbolic in his greeting.
“That’s how I regard it, the biggest and the best,” he explained as he spent much of the afternoon before his meeting with the Colombian coaching a group of children at Flint Town Football Club in North Wales. “There are fantastic clubs around the world, of course there are, but we played in Michigan the other day and there were 110,000 there against Real Madrid. It must have been 70-30 United.
“For me this is the biggest club in the world, no question. Coming seventh doesn’t diminish that. But it can’t happen again. Now we need to go out and prove it.”
When he was installed as Louis van Gaal’s assistant at Old Trafford this summer, the most decorated player in English football history became quickly aware of what his role entails. As his greeting to Falcao suggested, as the Dutchman sets about restructuring the playing staff, he is now the figure of continuity at the club.
“I’m the person who knows Manchester United inside out,” he said. “Just passing on my experience of the place to the new coaching staff, to the new players is important. It’s my job to let everyone know what it’s all about representing this club.”
The scene in Flint’s modest, homely little ground, on a bright, blustery afternoon on the Dee Estuary, with dozens of small boys and girls tearing around the turf enthusiastically in their new kit, may seem a long way from the pressure and intensity of the Premier League. But, as he offered instruction, Giggs behaved much as he does on the touchline at Old Trafford: calm, undemonstrative, giving a word here or there, high-fiving goalscorers, endlessly encouraging. 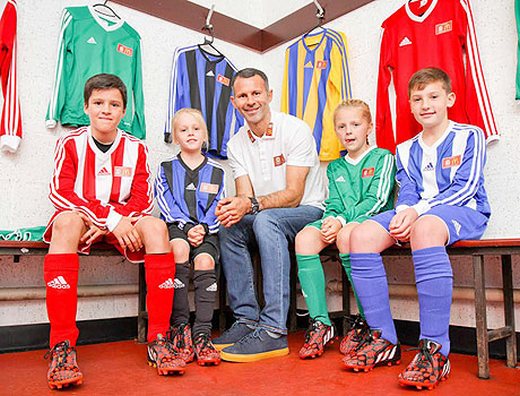 “Listen, I’m a rookie at this,” he explained after the session. “But whoever you’re coaching, it is about getting that balance between letting them express themselves and if they do something wrong trying to put it right. If you can send them away with one thing in their mind that might help them, then that’s great. That’s what you want.”

The one thing the increasingly expensive assembly of players at Old Trafford could do with right now is an injection of confidence. Several are playing as if devoid of it. For the coach, restoring that is a tricky task: defensive frailties, or failure to counter set pieces can be addressed through drills and lectures. Confidence is a far more ephemeral commodity.

“When I was a player, if I was lacking confidence, the only way to get it back is on the training ground,” Giggs said. “Getting that feelgood factor back comes through working hard at training. That’s all a player can do: work.”

So the coach has no input? “Obviously the staff having little words with you, pointers, suggestions, that helps. They observe you and tell you what you aren’t doing as much, or what maybe you should be doing. That’s what I try to do as a coach. If I see anything individually in a player’s game I’ll say something, but ultimately if you train well that gives you the platform to go out and play well.

“For me it was always hard work that solved things. But I agree confidence is a problem. It’s not easy at times, especially at Old Trafford where we’ve not performed really for over a year now – funnily enough away from home there’s not been the same problem. We need to get that sorted as quickly as possible.”

One way to increase collective confidence, Giggs says, is to bring in internationals of the calibre of Falcao and Ángel di María.

“When you see players of that ilk coming into the club it’s exciting; whether you’re a player or a coach it gives you a buzz. You want to play with the best players and you certainly want to coach the best. We’ve got very good players at the club now. It’s up to us – and them – to get that reflected in the results.”

Another thing he is certain about is that the club could not have a better manager. Far too publicly tactful to be drawn on the deficiencies of David Moyes, Louis van Gaal’s predecessor, he is convinced the man himself will get it right at Old Trafford.

Van Gaal, he added, has a very different methodology to that of Sir Alex Ferguson, under whose instruction Giggs grew up. “Obviously the manager – sorry, Sir Alex – had his ways of working, basically his man-management was brilliant, his knowledge was brilliant, but he left the day-to-day stuff to Steve McClaren, Brian Kidd, Carlos Queiroz, Rene [Meulensteen] and Mick [Phelan].

“Louis is more hands-on regarding what we’re doing day to day, he takes the sessions. It’s all very precise. He’s very vocal during training, very keen to communicate exactly what it is he wants and expects.”

Which is not the impression Van Gaal gives on the touchline, where he remains impassive in his seat, cradling his leather document case, his face entirely unemotional.

“He is calm. He’s probably finding his feet, but I noticed even during the World Cup he wasn’t up and about much, he doesn’t shout. But then, as a player did I listen to what the manager was shouting? Probably not. You’re concentrating on the game. As a manager – well I was only a manager for four games, so I’m not sure that counts – I did feel at times that you need to try and put things right. Louis prefers to work on the training ground.”

Giggs was quick to defend the system that Van Gaal is working on. “I thought the players got it pretty quickly, that was evident on tour,” he said of the 3-5-2 approach. “But for whatever reason they haven’t shown that ease since they came back. It may take a bit more time than we thought to get it right, but the players are on board. They are vocal on the training pitch and in the meetings. And that’s what we want. We want this system to get results.”

He added that his own morale had not been damaged by the sudden plunge into mediocrity afflicting his club. “I always took defeat badly. Winning was never as strong a feeling as losing. Winning was over quite quickly and when you suffered a defeat it lingered, it always had a bigger effect on me. That’s not changed. But when you’re at United you’ve got to win trophies, simple as that.

“Coming seventh last year wasn’t good enough. We haven’t started well this season, but we have to look to win something. We’ve got to be looking to contest the Premier League and look to get back in the Champions League. And I honestly believe, with the players we’ve now got, we’re not far off.”

With that Giggs had to return to Manchester for his first meeting with the new man Falcao. Though before he went there was one question that needed addressing: out on the pitch coaching the youngsters, when the ball landed at his feet, a sudden sparkle seemed to arrive in his eyes. Was that evidence he was missing playing?

“I’ve not really felt it until the game against Burnley, when I went out before the game to put the cones out and warm the lads up and I thought, this is a proper game this, the pitch was perfect. I just thought I wouldn’t mind playing today. Other than that, actually no, I’ve not felt it. It’s not that I’ve not missed it, I’ve not thought about it. I’m looking ahead. There’s a lot to look forward to.”

Ryan Giggs, McDonald's new Head of Welsh Football, was speaking at the launch of McDonald's new four-year community partnership with the Football Association of Wales. McDonald's is giving over 7,000 accredited junior football clubs one free kit every season for the next four years with the potential for over 250,000 kits to be distributed across the UK, as part of their work supporting grassroots football clubs. For more information visitwww.mcdonalds.co.uk/betterplay