Manchester United played out a 1-1 draw with Leicester City at the King Power Stadium in a hard-fought match, as Bastian Schweinsteiger netted his first goal for the club.
Jamie Vardy was undoubtedly the story of the day as he scored for the 11th game in succession – a Barclays Premier League record – to put the Foxes in front on 24 minutes, before Schweinsteiger levelled proceedings on the stroke of half-time.
The boss made four changes to the side that featured in the midweek draw with PSV Eindhoven, bringing in Paddy McNair, Juan Mata, Ashley Young and the fit again Michael Carrick whose return offered a timely pre-match boost. The United manager opted to set up with three at the back, with Chris Smalling, McNair and Daley Blind in front of David De Gea; Matteo Darmian and Young provided support as wing-backs.
Unsurprisingly, proceedings kicked-off at a lively tempo as a raucous atmosphere provided the perfect backdrop as the teams began to sound one another out in the opening exchanges. It was the home side that had more of the ball to begin with, but van Gaal’s men soon warmed into the game, probing around the Leicester 16-yard-box as the Reds searched for the ideal start.
The forward line of Anthony Martial, Wayne Rooney and Mata showed some nice touches, helping to win a flurry of corners that would, however, aid United's downfall as Vardy’s prolific run continued. 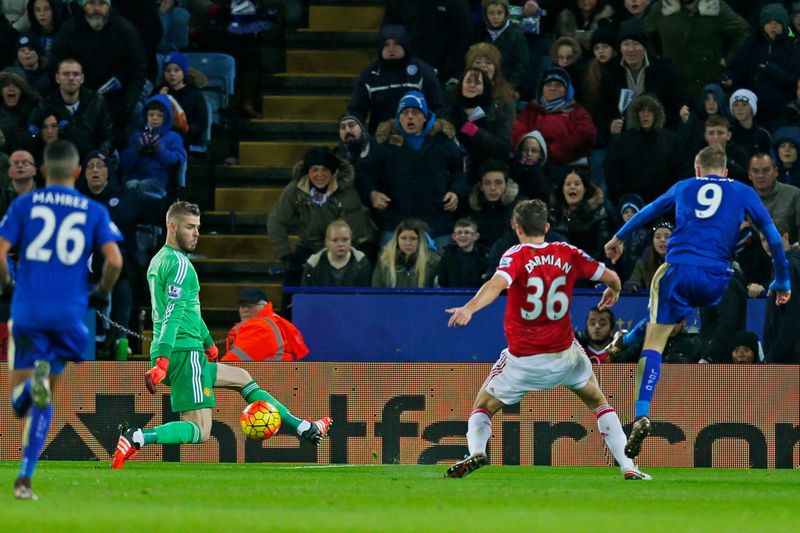 Kasper Schmeichel claimed comfortably from Blind's set-piece before wasting no time in picking out Christian Fuchs as the Foxes sprung out of defence. Finding himself in acres of space, the Austrian played through a pinpoint ball to find Vardy who demonstrated all the hallmarks of striker in form as he coolly slotted past De Gea. The Englishman peeled away to milk the acclaim of the Leicester fans, as the King Power stood to salute the man who had just broken Ruud van Nistelrooy’s run of scoring in ten consecutive games.
Understandably buoyed by Vardy’s record-breaking intervention, Leicester set about hammering home their advantage. Riyad Mahrez was the next to go close for Claudio Ranieri’s men as he combined superbly with Shinji Okazaki on the edge of the area, but his shot was well saved by De Gea. 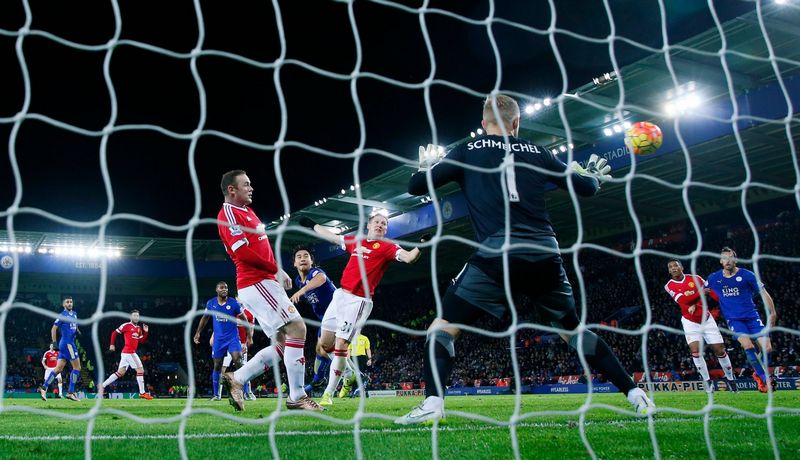 It was a concern that van Gaal’s men looked a little unsettled after conceding and looked destined to end the half behind, however just as he did at Watford, Schweinsteiger came to United’s rescue as he headed home a Blind corner to bag a crucial equaliser, only seconds before the referee’s whistle.

Possession: Leicester 33% United 67%
Shots at goal: Leicester 3 United 6
Shots on target: Leicester 2 United 1
Corners: Leicester 1 United 5
With the game delicately poised, United and Leicester came out of the traps well at the start of the second 45 as both sides went close to retaking the lead. Man of the moment Vardy failed to meet Marc Albrighton’s dinked cross as he found himself unmarked in the Reds area, before Schweinsteiger almost doubled his tally for the day, heading straight at Schmeichel from close range. A bright start then gave way to a cagey period, but with United firmly in control of possession, a factor lacking during an open first period. That said, the threat of a Leicester counter-attack constantly loomed over the game, with another swift break involving the excellent Mahrez and substitute Leonardo Ulloa forcing De Gea into another important stop.
Undeterred, United maintained composure and continued to spread the ball around with purpose but without really troubling the home side’s well-drilled defensive set-up. Van Gaal introduced Memphis Depay in place of Rooney who had taken a knock earlier in the half, as the United boss attempted to inject more pace into the Reds’ attack.
As hoped, United’s no.7 did look dangerous on the left, but he will have been disappointed not to do better when played in by Darmian’s header as he shot over. 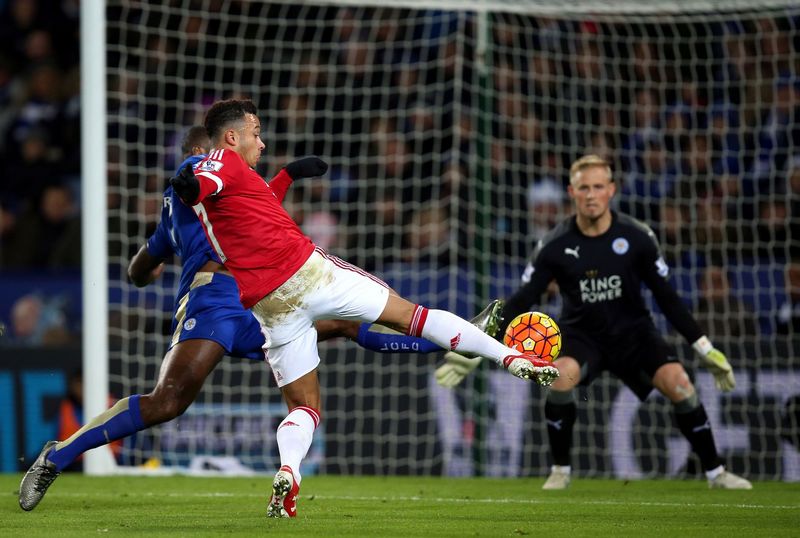 Vardy again threatened, before Darmian fired an effort just over the bar late on, bringing to an end a tight encounter.

Van Gaal: "We were the better team and created chances to win the game. We dominated for 90 minutes but have drawn the match."

Bastian Schweinsteiger: "I am happy with the goal, but I would be more happy if I had taken the second chance I had in the second half."

#MUFC played out a 1-1 draw with Leicester City at the King Power Stadium in a hard-fought match, as Bastian...