Manchester United suffered a disappointing defeat at Goodison Park to end a run of four league away wins, while definitively ruling the Reds out of a Champions League qualification spot and denting hopes of finishing in the top six.
David Moyes returned to his former club but endured a hugely frustrating afternoon as his side controlled large swathes of possession but were met by Roberto Martinez's men's direct, clinical approach, which brought first-half goals for Leighton Baines and Kevin Mirallas. 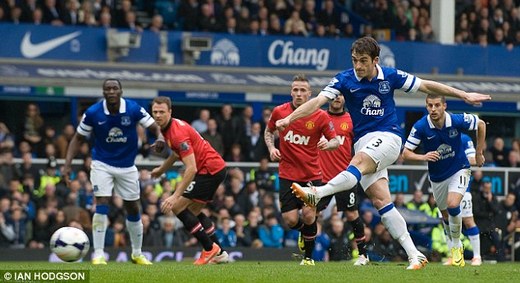 For all that Martinez's Everton are now renowned for free-flowing football, it was United who dictated possession via quick passing play in the first half, with Juan Mata and Shinji Kagawa at the centre of it. However, the home side often bypassed their midfield altogether. They were more clinical and it worked, taking the lead on 28 minutes after Romelu Lukaku's shot was blocked by Phil Jones' outstretched arm, with Baines converting the subsequent spot-kick.
United resumed control of the ball but couldn't penetrate Everton's resolute back line. And once again the home side proved ruthless on the break as a counter-attacking move on 43 minutes ended with Seamus Coleman slipping a pass to Mirallas, played onside by Alex Büttner, and he fired his shot past David De Gea. 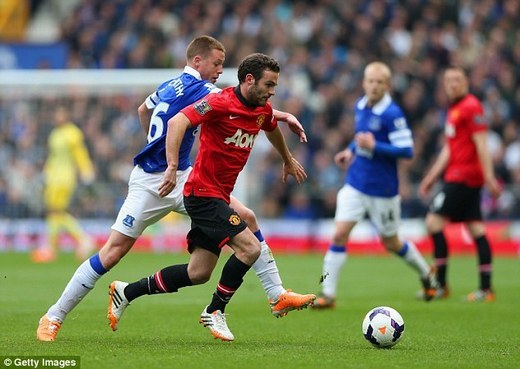 In the second half Kagawa had a shot saved by the largely untroubled Tim Howard, but the toiling to create still yielded precious few chances. Antonio Valencia, Javier Hernandez and Danny Welbeck entered the fray in search of goals. Perhaps United's best chance came on 87 minutes, but Rooney was denied from close-range by Howard, while Chris Smalling headed wide in injury-time, summing up a dissatisfying day on Merseyside.

The match A tale of possession versus penetration, and the latter won. United’s 62 per cent of the play and 598 passes compared to Everton’s 371 leaves no doubt as to who dominated the ball. But the only column that really counts is the scoreline and aside from a sprinkling of half-chances – Wayne Rooney having the best of them when Tim Howard saved from point-blank range amid the game’s dying embers – Everton dominated there. The hosts were clinical in taking two breakaway chances in a decisive first half; Rooney’s late opportunity and Chris Smalling's headed miss in injury-time felt like too little, too late. 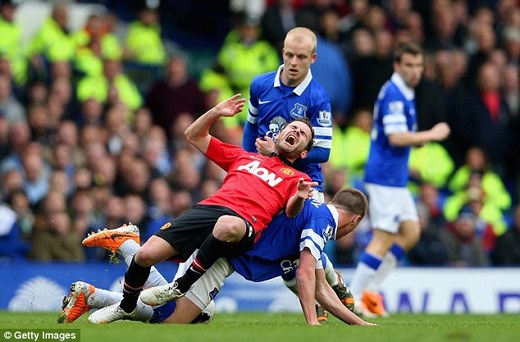 The goals They came against the run of play, but perhaps that was the point. Everton played on the counter-attack and their game-plan came off on the day. David Moyes’ men started at a rapid pace, moving the ball nicely between Juan Mata and Shinji Kagawa in particular. But if United’s play was a picture of possession, Everton were the epitome of ruthlessness, taking the lead when Jones instinctively handled Romelu Lukaku’s shot, leading to a penalty which Baines confidently converted. When United then surrendered possession in Everton’s half just before the break, the hosts countered and Kevin Mirallas fired past David De Gea, having been played in all too easily by Seamus Coleman.

Star men On the back of such a disappointing defeat, it is difficult to pick out individual performers. The early movement and combination play between Mata and Kagawa had hinted at a potential fleet-footed route through Everton’s defence, but the Toffees took the game by the scruff of the neck and the game’s momentum subsequently shifted.

Sub-plot David Moyes insisted beforehand that this match against his former club wasn’t about him – but camera lenses and eyes on both red and blue sides were trained on him for his first return to Goodison Park, where he had served the Toffees for over a decade before taking on the Old Trafford job. Former Everton striker Wayne Rooney was named United captain on the day, but it wasn’t a happy return to Merseyside for either man.

Move of the match There were a few choices for passing combinations in the first half; on 32 minutes, for example, there was a neat quick-fire interchange between Mata, Carrick, Kagawa, Rooney and Nani, but the latter couldn’t find the cross at the end of it to hurt Everton. That, in many respects, summed up a frustrating afternoon: good intentions, good possession, but it needed to be more forceful, more cutting, and quicker.

The opposition This was Everton’s seventh win in eight games and the confidence such a run brings was plainly evident in their play. They were unexpectedly direct at times, bold when attacking at speed, and you can take nothing away from them in that respect. But David Moyes certainly felt his team could have defended against that threat much better.

In the stands There's always a feisty reception at Goodison, but a Reds side led by Everton's former boss and featuring Wayne Rooney ups the ante. Leighton Baines said “it meant a lot” to the home fans to win with Moyes back in town, but United’s fans were louder in the first half, until the hosts went 2-0 up, naturally. That said, the away supporters didn’t stop singing throughout and with just one road trip left – Southampton on the final day – we can reflect on the incredible, unstinting support the travelling regulars have given the team this term… even if it provides precious little solace.