It was a day to forget for Manchester United in North London on Sunday as three goals in the opening 20 minutes sealed a 3-0 win for Arsenal.
The hosts raced in a two-goal lead through Alexis Sanchez and Mesut Ozil in the first 10 minutes, before Sanchez netted another soon after.
Having been outplayed for most of the first period, United improved after the break and forced Petr Cech into a couple of good stops, but the damage had already been done.
Louis van Gaal made two changes to the side that came from behind to beat Wolfsburg, with Michael Carrick and Ashley Young coming in for Morgan Schneiderlin and Antonio Valencia. Young came on at right full-back in midweek, but having impressed so much down the left last term, as a winger and wing-back, he returned to a more familiar role, with Matteo Darmian, a starter at left-back for the last two games, back in the right-back slot. 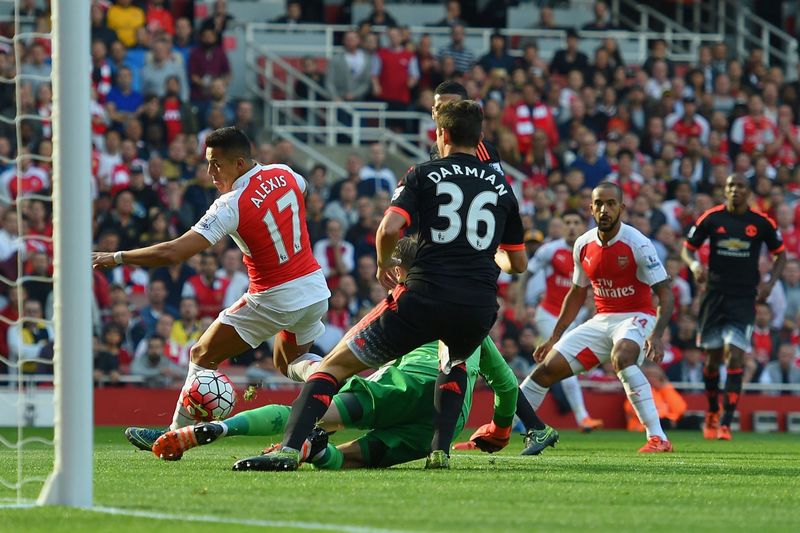 The teams came into the game on the back of contrasting Champions League results – United a 2-1 victory over Wolfsburg and Arsenal a surprise 3-2 defeat at home to Olympiacos. Many pundits wondered how Arsene Wenger’s side, who had been heavily criticised along with their manager, would respond. The answer in the opening 10 minutes was emphatically. 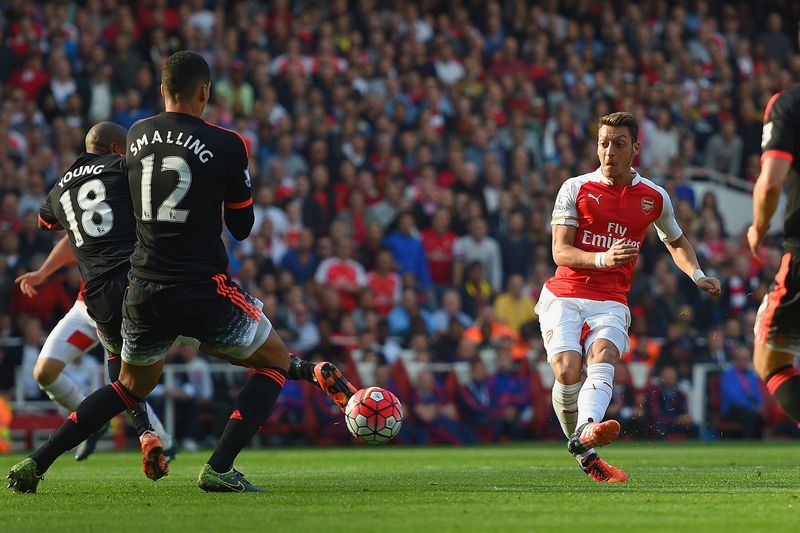 The Gunners came flying out of the blocks and within seven minutes were two goals to the good, without some Reds even having touched the ball. The first came on six minutes, when Ozil worked space down the right and slid a cross in for Sanchez to cleverly flick past David De Gea. Sixty seconds later, Ozil got himself on the scoresheet with a cool side-footed finish after being found by Theo Walcott in a sweeping Arsenal move. 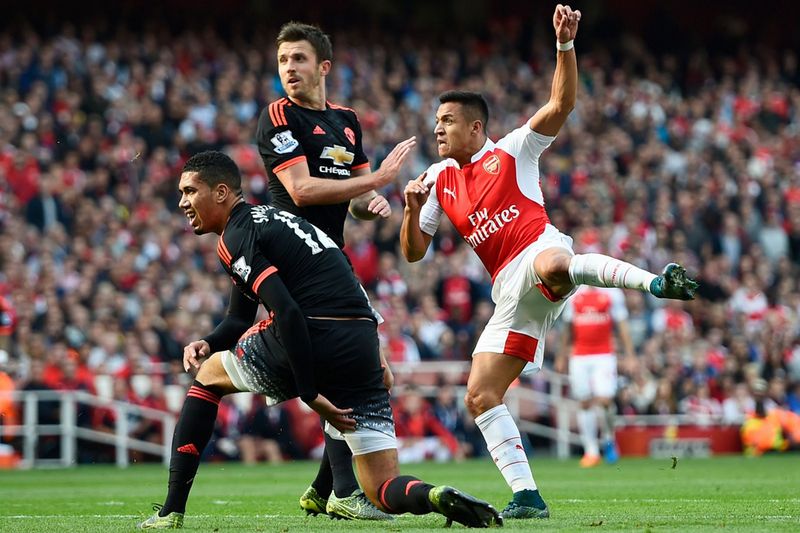 Just as the Reds attempted to get some sort of foothold in the game with a bit of possession and pressure on Arsenal’s defence, the Gunners made it three. Walcott was involved again, finding Sanchez on the edge of the box and, after tricking his way past a clutch of defenders, he blasted the ball into the top corner to leave the Reds stunned.
It could have been four just after the half-hour mark when Sanchez turned provider for Aaron Ramsey, coming in at the back post on the right, but he volleyed wide with the goal at his mercy.
As half-time approached, the Reds were given a glimmer of hope with a first opening of the game. Darmian’s ball into the area eventually came to Anthony Martial, who controlled it and shot on the turn brilliantly, but Cech stuck out a leg to block it.

Possession: Arsenal 47% United 53%
Shots: Arsenal 7 United 2
Shots on target: Arsenal 3 United 2
Corners: Arsenal 2 United 2
Van Gaal opted to make a double substitution at the start of the second period with Antonio Valencia and Marouane Fellaini replacing Darmian and Memphis; the changes saw Wayne Rooney switch to the left as Fellaini slotted in behind Martial.
The Reds knew a response was needed... and fast. Young almost provided it four minutes in when he cut in from the left and fired goalwards, but Cech leapt to his right to claim the ball. He was called on again just after the hour mark when Rooney guided a shot towards the target from the edge of the box, but the Arsenal stopper tipped it clear.
A neat move from the Reds on 68 minutes, involving Carrick, Juan Mata and Rooney, led to Bastian Schweinsteiger getting through, but Cech was there again to block bravely from close-range. 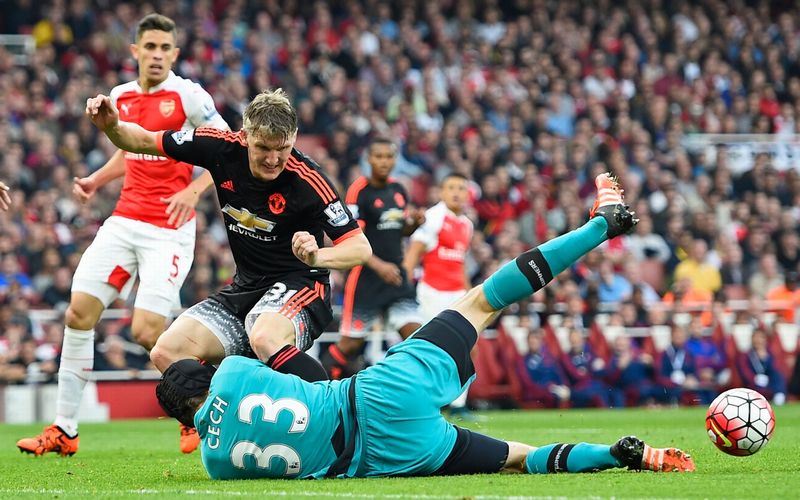 Arsenal had not been the attacking force they were in the first period and seemed content to sit on their lead, but they still had the ability to up the tempo when it was needed and Ozil almost made it four after another attack of pace and precision, only for De Gea to save.
Substitute Alex Oxlade-Chamberlain clipped the bar in injury-time as the Arsenal fans celebrated what they already had. The Reds, meanwhile, will be keen to move on from this match as quickly as possible.

Louis van Gaal: "It was a shock for me. It wasn't a normal performance. They were much more aggressive than us and, when you give a team like Arsenal so much space to play football, you know you shall lose."

Michael Carrick: "We are bitterly disappointed and will probably beat ourselves up about it over the next few weeks, but we’ll come back looking at the bigger picture. It’s a setback, but we’re still up there."

Arsenal vs Manchester United ALL GOALS

HT: Arsenal 3 United 0. The Gunners were quick out of the blocks to net three early goals at the Emirates. There’s a big half ahead for Louis van Gaal’s men.