Jamie Redknapp: Ryan mighty... even in his 40s! He was outstanding against Olympiacos and didn't look like he was out of breath What Ryan Giggs did at Old Trafford on Wednesday was astonishing. We often go overboard with players and can be too quick to praise them, but his performance was unbelievable and it was a privilege to watch.

Giggs is 40, the same age as me, so I know how he would be feeling, but I would not have fancied covering the same distance he did.

Normally if you are getting on a bit you would let one of your team-mates go across to take the free-kicks and corners just to avoid those few extra yards. Giggs was there all night.

He cruised through the game and didn’t even look like he was out of breath. He wasn’t playing a Bayern or a Barcelona midfield, but Olympiacos were still sharp. They pressed and harried United all night, but Giggs took it in his stride. His passing distribution was excellent and to be able to hit such accurate first-time balls kills defenders.

He showed his footballing intelligence with the positions he took up across the midfield and he broke up the play with plenty of interceptions.

He knows his physical limitations, too, and he never went to ground.

The fact David Moyes picked him for the biggest game of the season shows you what an important figure he is at United and though I’d be surprised if he plays against West Ham, it would be even more surprising if he is not involved against City next week or does not play an important role in the Champions League quarter-finals.

It was an outstanding display of football and a perfect night for him.

I don’t think we’ll see a 40-year-old give another performance like that in the Champions League. Unless Giggs keeps it up. 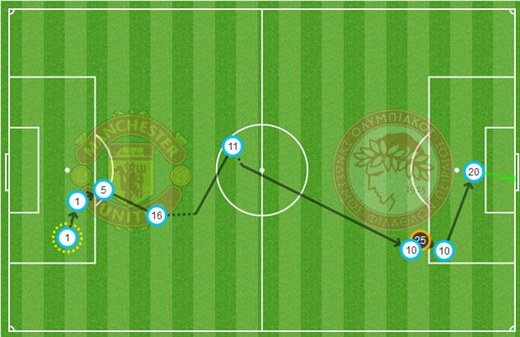 Ages of Man Utd Starting XI When Giggs Made His Debut