Manchester United will have to overturn a first-leg deficit in order to reach the Europa League quarter-finals, after a disappointing 2-0 defeat against Liverpool at Anfield.
The hosts took the lead midway through the first half courtesy of a Daniel Sturridge penalty and, despite a string of excellent saves from David De Gea, doubled their advantage with 17 minutes remaining through Roberto Firmino's close-range finish.
Ahead of the game, Louis van Gaal opted to make three changes to the side that lost at West Brom last time out, with Guillermo Varela, Morgan Schneiderlin and Marouane Fellaini replacing Matteo Darmian, Michael Carrick and Ander Herrera.
Both sets of fans were in fine voice to greet the players as they emerged from the tunnel, but United seemed determined not to get caught up in the occasion and immediately went on the attack, though Marcus Rashford was unable to connect fully with Memphis's cross. 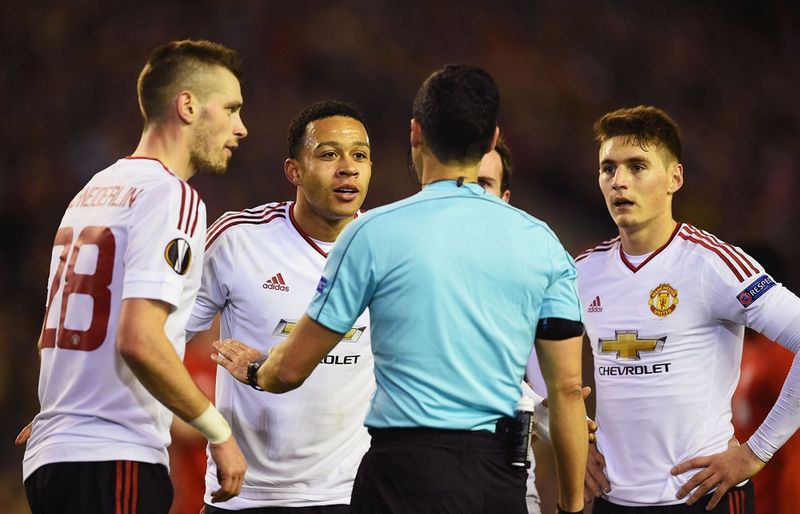 After an expectedly frantic opening period, the first real opportunity for either side brought the game's first goal. With 19 minutes played, Nathaniel Clyne earned the hosts a penalty after going down in the area under challenge from Memphis and, despite De Gea getting a hand to it, Sturridge converted the spot-kick. 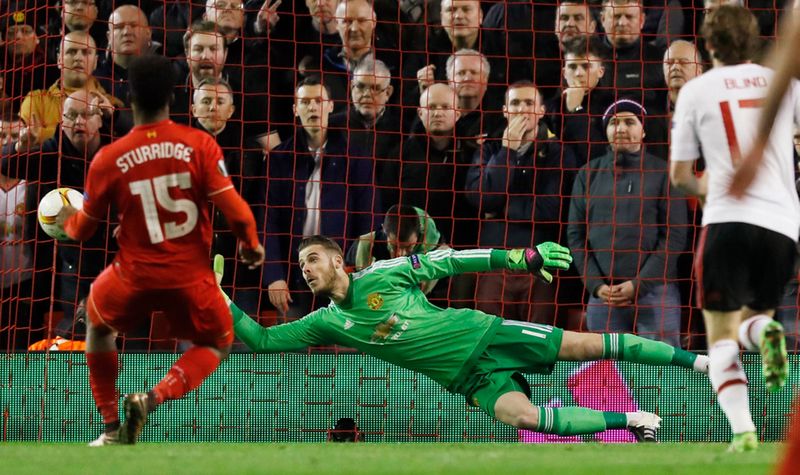 With the visitors rattled, it might have been 2-0 just minutes later, but this time the keeper came out on top. Again Sturridge was involved, this time digging out a low cross to the far post towards an unmarked Philippe Coutinho, but De Gea somehow got back to claw the ball away and in turn deny what looked like a certain goal.
The Spaniard was called upon again shortly after the half-hour mark, with Liverpool in search of a second goal. There was an element of fortune about the home side's next chance as Smalling slipped while attempting to head a cross to safety, allowing Sturridge time to shoot, but De Gea stood tall to block the striker's effort.
Meanwhile, van Gaal's men were struggling to make a mark on the contest, but did register a couple of rare shots on goal with half-time approaching, as Memphis's long-range free-kick swerved comfortably wide, before Marcos Rojo blasted over from range.
There was time for another superb first-half stop from De Gea, as Liverpool attacked down the right through Emre Can. The midfielder crossed towards Adam Lallana, whose close-range volley was kept out excellently, a save which kept the game firmly in the balance going into the break.

Possession: Liverpool 61% United 39%
Shots at goal: Liverpool 6 United 3
Shots on target: Liverpool 5 United 0
Corners: Liverpool 2 United 0
A difficult first half for United prompted a change in formation and personnel at the interval, as Michael Carrick was introduced, in a substitution which gave van Gaal's men some more control. Schneiderlin tried his luck from the edge of the area on 47 minutes, but his effort was saved easily by Simon Mignolet.
Liverpool were quick to remind van Gaal's side of their attacking threat though, and created an opportunity of their own at the other end. This time, Coutinho's goal-bound volley dipped towards the top corner, but again it was De Gea to the rescue, as the keeper dived to tip the ball over the bar. 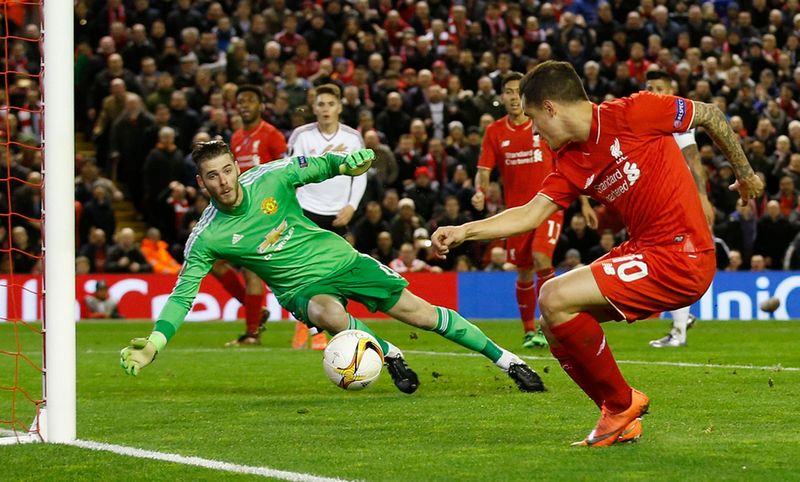 If there were any questions about United's standout performer at Anfield, De Gea soon erased any doubt, after being called upon yet again to keep the hosts at bay with 25 minutes remaning. Clyne found space on the edge of the area and drove a shot towards goal, but United's no.1 proved his worth once more, palming the ball to safety.
There was nothing De Gea could do about Liverpool's second goal, however, which eventually came on 73 minutes. After Carrick's attempt to clear the ball fell short, Lallana seized his chance to pull the ball back for Firmino, who had the simplest of finishes from six yards. 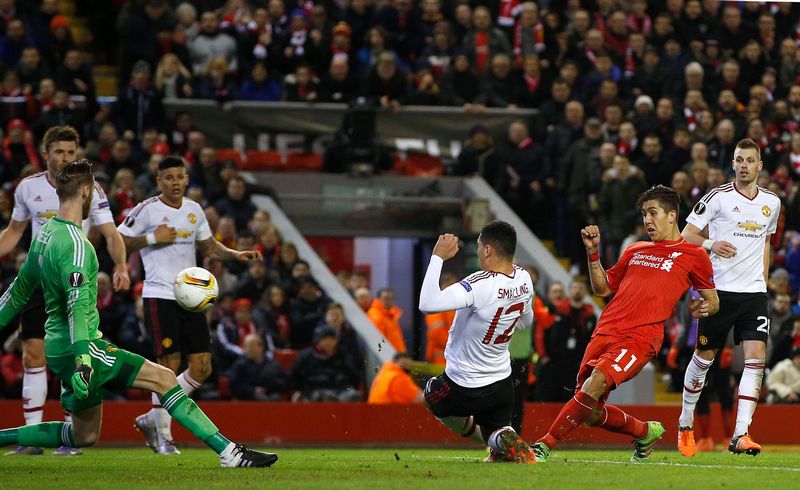 Despite the setback, an away goal would have changed the complexion of the tie, and was almost provided by Fellaini with five minutes remaining. Bastian Schweinsteiger - off the bench as a late substitute and making his first appearance since January - crossed to the far post but the Belgian's header dropped narrowly wide.
Next week's fascinating second leg at Old Trafford awaits, with United in need of another memorable European comeback.

Liverpool vs Manchester United ALL GOALS

#MUFC will have to overturn a first-leg deficit in order to reach the Europa League quarter-finals, after a disappointing 2-0 defeat against Liverpool.