It is impossible to escape the feeling that Manchester United were denied a laudable victory against Real Madrid not for football reasons but the painstaking cost of an unjust refereeing decision on a gripping Champions League night at Old Trafford.

United took a deserved lead shortly after half-time through a Sergio Ramos own goal and had dominated this contest for the best part of an hour until Nani was dismissed after challenging Alvaro Arbeloa for a high ball. Within 13 minutes, Luka Modric and, as fate would inevitably have it, Cristiano Ronaldo claimed a lead for the visitors that had never looked likely.

The overriding sense is one of disappointment at a 3-2 aggregate defeat, but United should feel great pride at the way the team and supporters acquitted themselves. This should have been a night to remember, instead it is a little hard to stomach.

Sir Alex is certainly unafraid to make tough decisions when he thinks it is necessary and the omission of Wayne Rooney from his starting eleven was a big call. The Reds boss instead chose a midfield three comprising Michael Carrick’s metronome passing, Tom Cleverley’s youthful exuberance and the experience of Ryan Giggs, while ahead of them was a front three featuring Nani, Robin van Persie and Danny Welbeck.

The latter, Sir Alex said, would be tasked specifically with limiting the influence of Xabi Alonso, a key figure in Real’s possession  play. Welbeck scored in the enthralling 1-1 draw in the Santiago Bernabeu, of course, but even the boon of an away goal didn’t alter the fact that the tie remained finely poised heading to Manchester.

The atmosphere inside Old Trafford was electrifying prior to kick-off and a crescendo of cheers met the introduction of Giggs on his 1,000th senior appearance and the return of Ronaldo. The former United hero thumped his chest in heartfelt appreciation, and yet once the whistle was blown his first touch was roundly booed while an early free-kick, struck following that familiar pose, was blocked by his countryman Nani to great cheers.

United’s first in a flurry of corners arrived on 13 minutes after Fabio Coentrao prevented Nani’s cross from reaching Giggs at the far post. Two minutes later the Welshman’s outside-of-the-boot cross found van Persie and the Dutchman’s tame volley was blocked. Regardless, it lifted the crowd and marked an intent to attack. After 18 minutes, Welbeck and Nani combined to earn a third corner and fine footwork from Giggs claimed yet another. The Welshman’s centre was met by a soaring header from Nemanja Vidic which hit the post. From the rebound Welbeck’s shot was saved on the line by Diego Lopez, although van Persie was ruled offside.

Sir Alex had clearly sent his team out with the message, above all else, to be brave and to be positive. Welbeck set the tone and tempo, tearing around the pitch, breaking up play and starting attacks with some  classy touches. Giggs joined in too. The 39-year-old performed with the knowhow of a player who has played this occasion a hundred times and the enthusiasm of someone tasting it for the very first.

Despite United more than edging the balance of play, Real reminded of their threat on 33 minutes when Gonzalo Higuain had the ball in the back of the net. It was rightly chalked off for a prior Sergio Ramos foul on van Persie and United’s riposte was to go straight up the other end; van Persie chested down Evra’s long ball and beat Raphael Varane on the turn before lashing a left-foot shot at Lopez. Real’s shot-stopper reacted quickly to divert Welbeck’s rebound out for a corner and from Giggs’ inswinging cross Vidic headed over. The Serbian took a punch to the face from Lopez. He has experienced worse but in a way it neatly framed the first half: United’s intent to attack and the threat that Real might strike a counter blow. 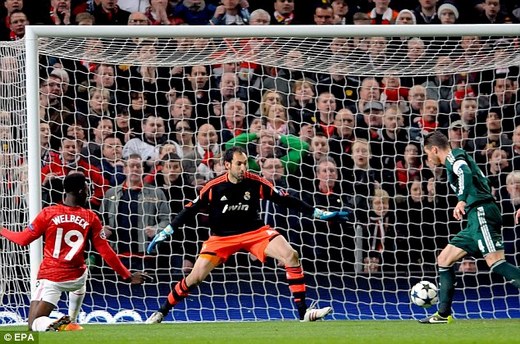 Sir Alex’s half-time concern was not the manner of his side’s performance - far from it - but a worry that of the many chances created United hadn’t taken them. It took three minutes of the second half for his men to dispel those fears. Welbeck and then van Persie had shots blocked but when Nani collected the loose ball and fizzed it into the box, Welbeck’s slight touch of the ball deceived Ramos, who inadvertently turned it into the net.

Things were going so well. Then United’s plans were thrown into disarray on 56 minutes when Nani was unjustly sent off by Turkish  referee Cuneyt Cakir; after an honest attempt to control a high ball he caught Arbeloa. The consternation inside Old Trafford was palpable but the decision was irreversible. The only option was to unite in adversity and the decibel levels at Old Trafford were instantly cranked up, with Sir Alex orchestrating the fans to try and haul the team over the line. From being confidently in control on the front foot, it was now backs to the wall. 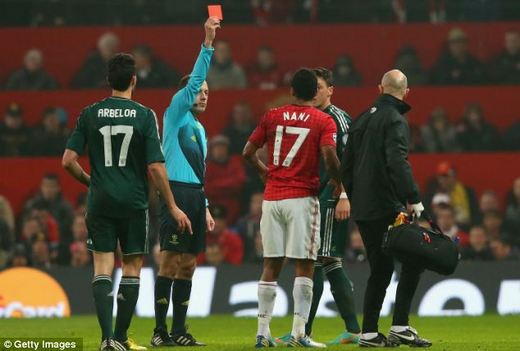 After 64 minutes van Persie cracked a shot goalwards that Lopez saved, but it was only a brief reprieve from the siege on United’s goal and two minutes later a long-range effort from substitute Luka Modric flew in off David De Gea’s left post. And like a dagger to the heart, Madrid’s second arrived three minutes later at the feet of Ronaldo, who tapped home at the far post.

It is never the United way to give in, but with an away goal advantage handed to Real two were now required for the Reds to progress. It looked like a mountainous task, yet Rooney entered the fray in place of Cleverley with 20 minutes remaining as Sir Alex rolled the dice, while Ashley Young later replaced the excellent Welbeck. United pressed forward valiantly, roared on by the Old Trafford crowd. Carrick forced an excellent save from Lopez with a powerful header, while Rooney blazed a volley over the bar but there were no late plot twists.

United’s class and quality and the fervour of the fans will live long in the memory, sadly so will the sense of injustice.