Yoga can help you stay forever young like Ryan Giggs 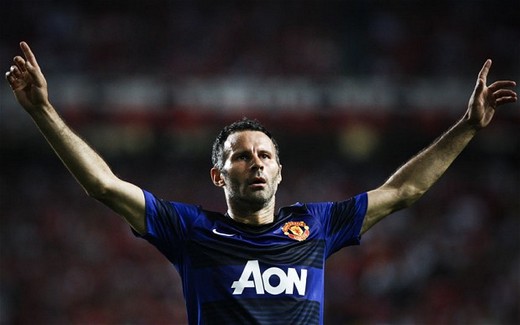 Sports yoga keeps Ryan Giggs and other Premier League stars fit and flexible. Sarah Ramsden, a yoga instructor for Manchester United and Manchester City, tells Mark Bailey how it can help you too

A few years ago I humiliated myself in front of Ryan Giggs, the most decorated footballer in English football history. Having been invited to the launch of his yoga DVD - a collaboration with his yoga teacher Sarah Ramsden - I fooled myself into thinking the planned yoga session would involve a fairly languorous workout. After all, yoga is for girls, creaky OAPs and those musky backpackers with tattered bangles you see slinking across the beaches of Goa, right? I could probably even check my emails halfway through, so long as Giggsy wasn’t looking.

Wrong. In a room full of unforgiving mirrors, I saw a beetroot-faced, upside-down version of myself balancing precariously on a yoga mat with my quivering legs and arms contorted into elaborate frozen dance moves. At one stage it looked as though I was trying to spell out all four letters of the YMCA at once.

The lithe elegance and balletic grace of Giggs, who was stretching just in front of me, only made my brick-like biomechanics more shameful. As I winced against the pain, which was making my face turn redder than Fergie’s nostrils after a night on the Scotch, I tried heroically not to face-plant in front of a football icon. Giggs fixed me with a kind smile and said simply: “Remember to breathe.”

The lesson I learned that day was that sports yoga – a brand of yoga which develops athletic performance, not just general health - is much tougher than most men think. So tough, in fact, that somewhere along the way I forgot to inhale the oxygen essential for life itself.

The very sight of Ryan Giggs today - lean, athletic, and still playing Premier League football at the age of 40 – provides an irrefutable testament to the age-defying benefits of yoga. As he told me: “It strengthens your muscles, improves flexibility, but also keeps you fit and gets you out on the training pitch so you can train every day. You want to be out there so you need to get your body robust and ready for anything. If I do a yoga session the next day (after a game), I’m nowhere near as stiff and I’ll be back training at the right level a lot quicker.”

Even those rather awkward looking YMCA shapes have their purpose. “You see moves in yoga and sometimes you think, ‘Why am I doing this?’ Then Sarah will show me a picture of a footballer doing that move in a game. Some positions look awkward, but if you look at pictures of a footballer taking a shot, their body will be in a really awkward-looking position too, because you’re off balance. When you explode with pace or kick a ball, you need flexibility and strength and the yoga really helps to build that.”

Giggs’s professional instructor Sarah Ramsden has now been working with players at Manchester United and Manchester City for seven years. She also teaches players from Southampton, Bolton, Burnley, Notts County, Wigan, Derby and Preston. Although professional integrity means Ramsden doesn’t like to discuss her work with individual players, the likes of David Silva, Joe Hart and Rio Ferdinand have all spoken publicly about how she has helped them. Ramsden has noticed a wider acceptance of yoga in professional football.

“The change in the game over the last 10 years to be faster, sharper, more athletic and more gymnastic is what has really driven the change in attitudes to yoga,” explains Ramsden. “Being supple and having good movement patterns helps speed, power, sharpness of movement, efficiency and recovery, and players can see and feel the difference it makes. Of course, when high profile players, like Ryan Giggs, talk about keeping themselves flexible and supple, it makes everyone stop and think.”

The cosmopolitan nature of the Premier League has also helped with the promotion of yoga as a fitness tool for footballers, with snake-hipped Brazilians and nimble Spanish players arriving in England with a deeply ingrained belief in the value of flexibility drills. “Players from these countries tend to have a culture of seeing stretching as just another part of being an athlete,” explains Ramsden. And as the pace and intensity of Premier League football has increased, so too have the demands on the players’ bodies. “I started in football almost ten years ago and caught the tail-end of the period when there were lots of massive central defenders. Now players in all positions tend to be more athletic and more gymnastic.”

Ramsden works with players at Manchester United and Manchester City twice a week – when their packed schedules allow – and picks out exercises for them to work on in their own free time to keep them supple and durable. “Football demands explosive end-range movements combined with the repetitive strains of running and kicking. This means that players lose suppleness and become stiffer over time. Yoga helps re-set muscle length so players stay mobile and supple; it keeps them moving efficiently; and it keeps their bodies able to fully express the talent they have on the pitch. When we talk about a player being ‘athletic’, we are looking at an extraordinary combination of strength, power and flexibility.” 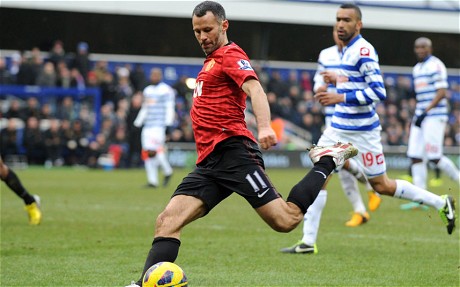 Yoga also keeps players feeling young and ache-free. “In terms of injury prevention, yoga helps slow down the creeping stiffness of age - and that protects your joints. If you are tight through the muscles around the hips – hamstrings, groin, glutes, quads, hip flexors – then you usually develop a pattern of excess movement and compression in the lower spine which results in back problems. With a football player this is hugely exacerbated by the running and sprinting they do. So, again, yoga can help free the hips and reduce back issues.”

It is clear that what works for Premier League footballers can also help amateur athletes, whose mix of sporadic exercise and prolonged desk shifts can cause similar problems. Yoga builds flexibility and stability which will galvanise your body for exercise, and it helps to reduce muscle imbalances which can lead to injury. “Think of yoga as training for your flexibility and core – it should be doing both,” says Ramsden. “All men – and especially those doing regular sport like running, cycling, triathlon or football – need to keep their movement and suppleness. A regular yoga practice will lengthen muscles that have become short and tight, keep your shoulders, hips, knees and ankles moving fluidly and freely, and keep efficient transference of power and movement through your core. You will feel more free and you will move more fluidly and more efficiently; your niggles and minor complaints should disappear; and you will be able to go on doing the sport you love for longer. What’s not to like?”

GET FIT WITH SPORTS YOGA

Ryan Giggs’s yoga teacher Sarah Ramsden has created the following sequence to help any man stay fit and flexible. “This will loosen your hamstrings, calves, quads, groin and glutes, as well as stretch out your back, making it great for runners, cyclists, footballers and triathletes.”

From a high plank position, push back through your arms so that your hips lift high – you’ll be in an upside-down V-shape. Feel the stretch through your calf muscles. Come forward to a plank position and repeat slowly three times. Then hold a Dog Stretch for 30 seconds, pulling both heels towards the ground. 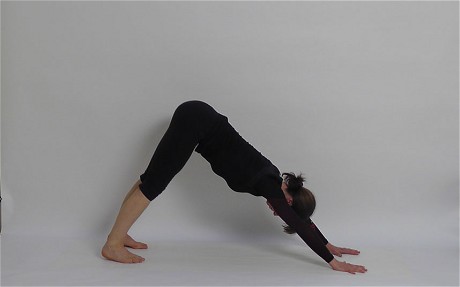 From a Dog Stretch, turn your knees and feet outwards. Bending your knees, push back into a Long Squat. Repeat slowly three times, feeling the stretch in your quads and groin. Finally, hold the Long Squat for 30 seconds. 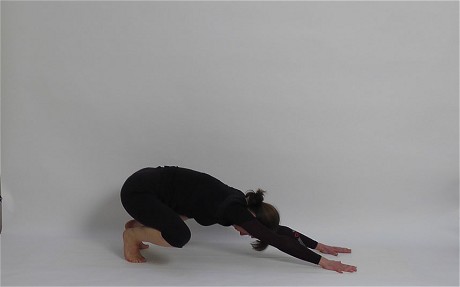 Push up to a Dog Stretch. This time turn your feet forwards again. Bend your knees forward and lift your heels, and then pull your heels down again to straighten your legs. Repeat slowly three times, feeling the stretch in your calf muscles. Then stretch each calf individually by bending one knee forwards and pulling the other heel towards the ground. Hold for 30 seconds and change sides. 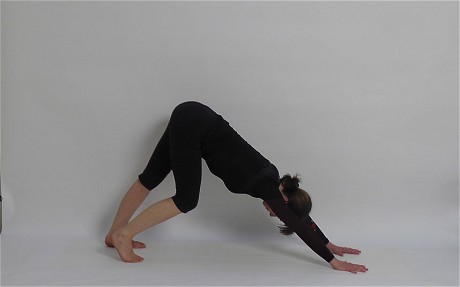 From a Dog Stretch, step forwards with your right leg as if lunging. Bend the right knee so that you can drop onto the ground, resting on the outside of your right hip with the right knee on the ground. Bend both legs to 900 angles – the right leg will be in front of you with the foot pointing out to the left, and the left knee will be out to your left side with the left foot pointing backwards. Lean forwards over your right shin and keep turning your torso to the right until you feel a stretch in your right glutes. Hold for 30 seconds or up to a minute. Push back to a Dog Stretch and change sides.

Sarah says: “Be patient! It takes time – but you will soon enjoy feeling more free and moving more easily. It will pay off.” 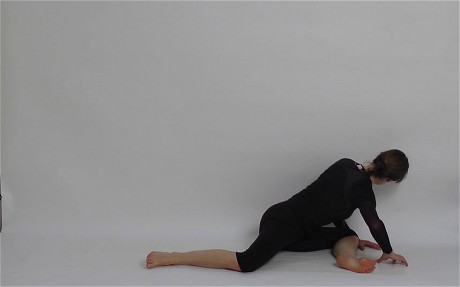