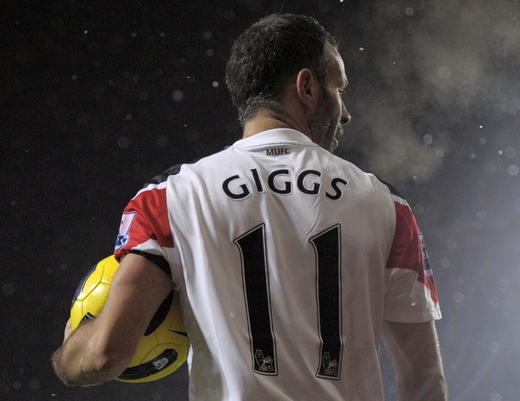 How does Ryan Giggs at the ripe old age of 37 keep going very strong at the highest level? What motivates him to train at the intensity required to be successful in the Premier League? These recent weeks have seen him beat his own record of being the oldest scorer in the Champions League and also scored against Leeds in the Carling Cup. His influence at Old Trafford is showing a little sign of diminishing.

To be a star in the modern game, talent alone is insufficient. You need to have the desire and appetite in abundance – and that is what sets Giggs and other top sportsmen and women apart. Do you think the likes of Roger Federer or Tiger Woods need the money that comes with winning trophies? Is Rafa Nadal on match point in the French Open thinking about how much the winner’s cheque is?

The answer to those questions, many would argue, is no. They are all extremely wealthy men whose main motivation is being the best at what they do. Don’t get it wrong, money is important, but ultimately, when their careers are over, they will be judged on how many majors they have won and not on their bank balance. The same applies to Giggs.

He has won 12 Premier League titles, four FA Cups, three League Cups and two Champions Leagues, and is also the record appearance maker at Man United, an impressive tally which he seems determined to add to.
However, his longevity has been helped by the change in training methods over the course of his career. Back when he made his debut in 1991, training was tough but not tailored to what you would do in a game. It was quite common to go on long runs of between six and 10 miles which were good for stamina but not match related.

As a midfielder you may run around eight miles in a game, but it is made up of walking, jogging, sprinting and short sharp bursts which involve twisting and turning – so nowadays, any running you do is built around that. Players also have their own individual weight training programmes which are designed specifically for their needs. Agility and core stability have also become a key component, and that is exactly what is helping Giggs extend his career.

It is not just on the training field that things have altered. Nowadays, it is quite common for clubs to employ a nutritionist, so players are far more aware of what and when they should eat. It is also important to take on plenty of fluid and quite often, you will have your urine tested to make sure you are sufficiently hydrated, particularly the day before a game.

Your body fat is also constantly monitored rather than how much you weigh. You could have drunk a litre bottle of water on the way to work or done an extra gym session that can alter your weight by a kg or two, but that won’t affect your fat percentage. Giggs has also adapted his style and position. The days of tearing up and down the left wing have become more sporadic, and now, often when he plays, it is more central.
Retiring from international football would also have helped with less game and travelling in his schedule. Although he will have benefitted from all the above, but his desire and heart that have been the main reasons for his continued success. All of these attributes are why Sir Alex Ferguson wants him around his football club regardless of age.

Managers have been guilty of writing off certain individuals far too early. For example, Arsene Wenger in the past had been unwilling to give players over 30 longer than a year’s contract. Because of that, he had lost key men with experience which cost them trophies in recent seasons. It is important that you have a youthful look about your team, but you also need people who have been there and done it, who lead by example and demand the best from those around them.

Giggs is the most decorated player in English football history. He also holds the club record for competitive appearances. In recent years, he has captained the team on numerous occasions, particularly in the 2007–08 season when regular captain Gary Neville was ruled out with various
injuries.

The ex-Wales international has a number of personal achievements. He was the first player in history to win two consecutive PFA Young Player of the Year awards (1992 and 1993), though he did not win the PFA Player of the Year award until 2009. He is the only player to have played and scored in every season of the Premier League and he also holds the longest run of successive scoring seasons in the UEFA Champions League history.

At the international level, he  played for the Welsh national team prior to his retirement from international football on June 2, 2007, and was once the youngest player to ever represent his country.

In addition to the many honours he  has received within football such as being named in the Football League 100 Legends (the last active player in the list), he was appointed an OBE in the Queen’s 2007 Birthday Honours list, and was inducted into the English Football Hall of Fame in 2005, for his services to English Football. He was named as BBC Sports Personality of the Year in 2009. On January 31, 2011, Giggs was named Manchester United’s greatest ever player by a worldwide poll conducted by United’s official magazine and website.

Off the pitch, newspapers claimed Giggs had “single-handedly revolutionised football’s image” when he appeared as teenager “with pace to burn, a bramble patch of black hair bouncing around his puppy popstar face, and a dazzling, gluey relationship between his impossibly fleet left foot and a football.” As a result of this, he was afforded many opportunities not normally offered to footballers at his young age, such as hosting his own television show, Ryan Giggs’ Soccer Skills, which aired in 1994, and also had a book based on the series. Giggs was part of the Premier League’s attempt to market itself globally, and he featured on countless football and lad magazine covers, becoming a household name and fuelling the era where footballers started to become celebrity idols on a par with pops.