Torres off to Manchester United, Giggs and Neville head to Carryduff 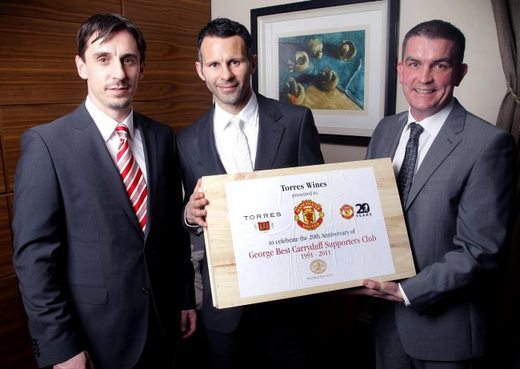 It's official. Torres is on the way to Manchester United.

No, it’s not Chelsea’s Spanish striker Fernando Torres who will be making the trip to Old Trafford but rather a selection of famous wines from his fellow countryman Miguel Torres.

The special gift sets were presented to United legends Ryan Giggs and Gary Neville by Gareth Bradley, managing director of local wine company Woodford Bourne NI, at a function in the Europa Hotel to celebrate the 20th anniversary of the Carryduff Manchester United Supporters Club.

Lifelong United fan Gareth said: “I’m not sure what Sir Alex thinks of Fernando Torres these days but he definitely knows his wine and I’m sure that he’ll be as happy with this celebratory selection of Torres wines as he would be with the Chelsea striker who to be honest has hardly set the world alight since his transfer from Liverpool in January.

“It was a fantastic gesture from Manchester United to send Ryan and Gary over to join us in celebrating the 20th birthday of the Carryduff Supporters Club. Hopefully there will be lots more to celebrate at the end of the season with United still going strong in the Premier League, Champions League and FA Cup.”