Thomas Ince: Dad was great but I always wanted to be Ryan Giggs 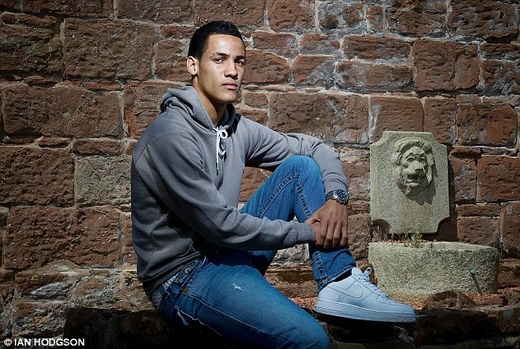 Having a famous father helped shape his career choice, but it was having a famous lodger that made Thomas Ince the player he is today.

Watching dad Paul stride the San Siro stage in his pomp 15 years ago, the impressionable young Ince took in the sights and sounds from his seat in the directors' box and vowed to follow in his footsteps.

He has been true to his word, but, as he prepared for Saturday's Wembley play-off final against West Ham, Blackpool's goalscoring midfielder admitted it was hardly a case of Ince Mk ll.

'I am so proud of my dad, and really value his advice and guidance, but we are not at all alike as players or in personality,' he said.

'In fact, I'm the opposite to him in many ways. He has this stern look and has an opinion about most things, whereas I am a lot quieter, much more laid back.

'While he was a midfield enforcer, I was always much more interested in taking the ball past players, rather than off them. My idol has always been Ryan Giggs, and it is weird to think he lodged with us for six months when he started out at (Manchester) United.

'I was only really small, but he kicked a ball about with me in the garden, and I do sometimes wonder if that influenced how I turned out. I always favoured my left foot and always played on the wing, if we had a game in the school playground or on a pitch.

'Like other kids, we'd pretend to be our heroes, and I always said I was Ryan Giggs. The others would look at me and say, "What about your dad? You've got to be Incey." But I'd just reply, "No, I'm Giggsy", and when they saw the ball on my left foot all the time, they could see why.

'I based my whole game on Ryan, from watching him live and on video for United and Wales, and it's great that he's still good mates with my dad.

'He still phones me up for a chat about how I'm doing. I often stop and think about that, my all-time hero giving me advice on how to be a better player. I've been lucky in a lot of ways.

'My dad actually prefers it that I followed my own career path rather than trying to be like him. He gets frustrated with the "Paul Ince's son" tag as much as I do and wants me to be recognised in my own right.
'Being a different type of player is also good for giving him a bit of stick. I keep telling him his sort are the boring ones who just get the ball and give it to the wide men, the entertainers, the ones people pay to watch!'

Images of Giggs the house guest may be treasured memories, but the move to Inter Milan and the friendships his father forged there also helped mould Ince Jnr into a player coveted by a host of Barclays Premier League clubs, headed by Everton, Swansea and West Bromwich Albion.

'That was an incredible experience,' he said. 'We lived near Jurgen Klinsmann high in the hills overlooking Lake Como. It was a lovely apartment, but not when I'd finished with it!

'I was always kicking a ball around and breaking things. I remember once belting it and smashing one of my mum's best Lladro ornaments. They are not cheap and she went mad but my dad said, "Never mind that. Did you see how he hit it? He's going to be a footballer." He was really made up.

'I was only four or five, but the more I went to Inter's training ground and games at the San Siro, the more I resolved to make football my career.

The memory of going to the Milan derbies will never leave me, and it was magical watching players like Clarence Seedorf and Javier Zanetti. Every time, I just thought, "This is what I want to do".

'There was one game where I found myself sitting behind the Brazil striker Ronaldo. My dad wasn't playing that day and was next to me. He had a word with him in Italian, and the next thing, Ronaldo was autographing my T-shirt. I was speechless, in shock. That shirt would have been binned normally, once I'd grown out of it, but not after that. It's in a frame on the wall at home.

'But, following my dad around, I saw the other side of being a player at the highest level. I was at the 1998 World Cup with my mum and will never forget the game with Argentina when he missed one of the penalties and we went out.

'I burst into tears and was still crying when we met up with him afterwards. He was standing by the team bus chatting to Zanetti. He just bent down and picked me up and carried on talking. I knew how much he must have been hurting, but his composure never wavered. I always thought that was a great lesson.

'There will be lows as well as highs, and you have to handle them. You sometimes have to take it on the chin, like my dad did that day. He showed great mental strength.'

The lesson should stand Ince, 20, in good stead at Wembley when he faces the wrath of West Ham fans who still target his father for posing in a United shirt before his move to Old Trafford had been completed.
'It was 2 3 years ago, but he has never been forgiven for that,' he said.

'Dad is who he is, and I am part of that, but I know he never intended to cause any upset or offence. I will get some stick, no doubt. Probably the worst I've ever had, but I will have to deal with it. I mustn't let it affect what happens on the pitch.

'Both my parents will be at the game, along with a few friends, and I know my dad will be really proud. I've seen him at the old and new Wembley a few times, as a player and manager, but it's the other way round this time.

'Of course, I'm still known as Paul Ince's son, but I'm hoping that may change in time. It's a dream that, one day, I will be an England player and he will be telling people he is Thomas Ince's dad. I've told him that, and he is all for it.'