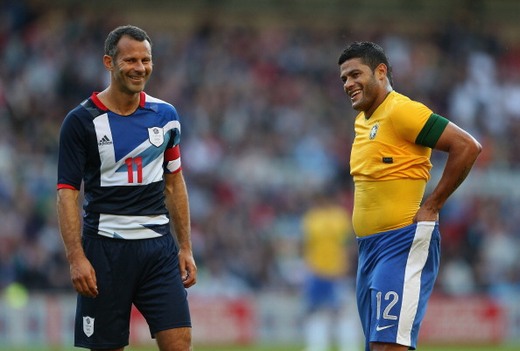 England’s ultimate patriot Stuart Pearce will rely heavily on Welsh influence as his managerial career is put on the line at the Olympic tournament.

Team GB’s opening game against Senegal at Old Trafford on Thursday represents their men’s first involvement in an Olympic Games for 52 years and has faced opposition in Wales, Scotland and Northern Ireland, who fear it could lead to FIFA considering a British team at future World Cups.

Pearce also knows the next three weeks carry huge personal implications after he has been stripped of a lot of his power at the FA and criticised for leaving David Beckham out of his Olympic squad, instead picking Wales legends Ryan Giggs and Craig Bellamy and Manchester City’s Micah Richards as his over-age players.

It is a huge gamble for Pearce, who, four months ago, appeared one of the most powerful managers in football, in temporary charge of England, the  Under-21s and Team GB. Since then, he has been ditched from any involvement at senior level by England’s new manager Roy Hodgson and his Under-21 job is also under threat.

That leaves just the Olympics for one of England’s most popular internationals, which explains why he made the tough call to exclude Beckham and pick five Welshmen in his  18-man squad, including the current national team captain, Aaron Ramsey of Arsenal.

‘I’m the first to admit that I have to make sure my CV keeps getting topped up and I improve and improve,’ he said. ‘This tournament will certainly help in that respect. It will improve my coaching ability.’

Pearce knows an Olympic medal will help him land a top club job. And his destiny lies in the hands of the Welshmen, most notably 38-year-old Giggs, his captain, and the spiky and sparky Bellamy.

‘They’re fantastically professional, have no airs and graces and send a great message just by the way they conduct themselves,’ said Pearce.

‘Ryan has been a great  captain in the build-up and he will grow even more in the tournament. The door is open for him to give his opinions to me, which he does.’

Friday’s 2-0 friendly defeat by  Brazil shows how much GB must do to compete for a medal. Pearce has had three weeks to prepare his team while others have been building for two years. Apart from goalkeeper Jack Butland, he has not been allowed to pick Euro 2012 players, which ruled out Alex Oxlade-Chamberlain, Phil Jones and Danny Welbeck.

In contrast, Spain’s squad features Euro 2012 winners, among them Chelsea’s Juan Mata and Jordi Alba, who each scored in the final.