The secrets of my success: Ryan Giggs 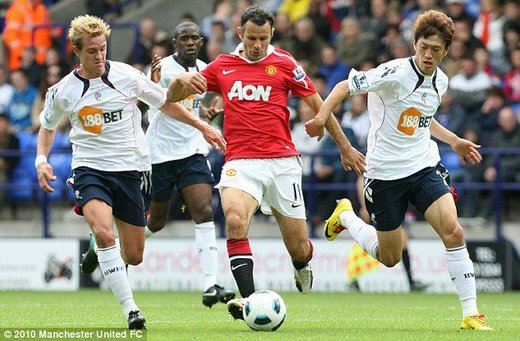 Voted BBC Sports Personality of the Year 2009, Ryan Giggs is the most decorated player in English football history. He was born in Cardiff, the son of a professional rugby union player, but a possible rugby career was ended by a visit from Alex Ferguson on his 14th birthday. Since breaking into the Manchester United first team at the age of 18 in 1990, Giggs has made over 800 appearances, helping his side win the Premier League 11 times, the FA Cup four times, the League Cup three times and the Champions League twice. Still a regular first-team member at 36, he lives near Salford with his wife and two children.

Accept the hairdryer. I’ve had the hairdryer treatment from Alex Ferguson lots of times, and I still do. But thankfully it’s mostly about things I’ve done during the game, like when I’ve taken a shot at goal but should have passed it. I’ve had that since I was 14 in the youth team. Nowadays I get ‘You should know better at your age!’ Even as an elder statesman of the team I’m not immune. I don’t think you ever get used to the hairdryer.

Working hard is a skill in itself. There are plenty of players out there with great natural ability who simply didn’t work hard enough and threw it all away. They didn’t dedicate their lives to football, they weren’t disciplined enough and they didn’t make enough sacrifices. You can have all the ability in the world but without hard work you won’t reach the standards your ability deserves.

Balance is the key. While it’s important to be disciplined and structured in training, and follow the advice given to you by your coaches, you must leave room to let your natural talent shine through.

Have fun, but avoid excess. I was in the Manchester United first team at the age of 18 and I’m not going to say I never went to a nightclub and didn’t meet girls, but I didn’t overdo it. My mates would be going out on Friday, Saturday and Sunday night, and I’d probably only join them on a Saturday. At 18 it can be tough, because you think you can get away with going out the night before a game, but ultimately you can’t. Having said that, Lee Sharpe says he never had a boring night out with me.

Get organised. I’ve always been quite an organised person, particularly since turning 30, which has been a big help in prolonging my career. The only injury trouble I’ve had so far have been with my hamstrings, and I decided I needed to do everything I could to stop getting problems. I took up yoga six years ago – no alcohol, practising yoga, seeing an osteopath and having acupuncture have all become part of my routine.

Don’t dwell on your achievements. At the moment, the records I hold don’t mean a lot to me. I don’t even think about them until someone else brings them up. I won’t look back until I’ve finished.

Study your opponents. If I know we’ve got to play a team in a week’s time, I’ll look at the player I’m up against and the team as a whole. Other than that, I watch football because I like watching it, and sometimes I have to take off my professional head and just try to enjoy it.

Settle down. Having a happy and secure family life behind me has definitely helped with my success. My favourite period of my career has definitely been the last seven years, since being with my wife and having children. You can definitely concentrate better knowing that you have stability away from the game.

Be boring. I’ve never been one to get carried away with a victory. When you win it’s easy to get excited, but in football you can be a hero one day and a few days later miss an open net and be a villain. I’d say defeats have a much bigger effect on me than winning any trophy. When you win a trophy it’s brilliant for a couple of days, but if you’ve lost out on one the feeling lasts all summer.

Don’t think too much. The best things I’ve ever done on a football pitch have been instinctive. You can’t usually say that you meant to hit it in the top corner or to beat three players like you did – it’s always been instinct.