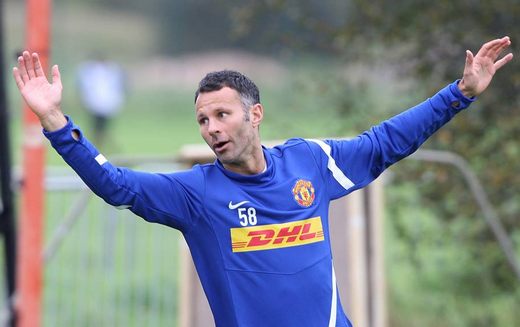 In an exclusive interview recorded for MUTV’s Inside Carrington show, Ryan Giggs talks to Mark Sullivan about training regimes and the keys to his longevity…

How has training changed over the years?
It's changed a lot. Much of that is to do with the surroundings that we've got now - Carrington is completely different from The Cliff [the old training ground]. We've got the swimming pool, the gym, the big sports hall, an indoor astro-turf pitch… we've got everything you could want really. The Cliff was pretty basic; there was just a changing room, not the best gym in the world and really old weights. You just went out on the pitch and trained, came in, had a shower and went home, whereas here you've got so much to keep you occupied and keep you here longer.

And there's a lot more staff involved in the training side of things these days too...
Yes that's another thing that's changed. Back when I started it was the manager, his assistant, Kiddo [Brian Kidd] and Archie [Knox] before that. Then you had a physio and that was it really. Now, we’ve got an assistant manager, a coach, fitness coaches and specialists in weights and running, so things have changed a lot.

Run us through a typical day at Carrington…
I’ll usually get in about quarter to nine, get a bit of breakfast then have a massage for 45 minutes. We all jump on the [exercise] bikes at 10 for 15 minutes just to turn our legs over. We'll then have a 10-minute stretch and then head out to train. If it’s early in the week and we don’t have a midweek game we’ll be out there an hour and a half or two hours maybe. If it's towards the end of the week and near the game if it will be half an hour or 45 minutes of intense quick play. Personally, I also do leg weights some days and yoga twice a week.

How much has the yoga helped you?
A lot - it's one of the main reasons why I'm still playing now at 38. I started when I'd just turned 30 because I wanted to try and help ease the problems I’d had with my hamstrings and it’s helped me in every other way as well; strengthening my legs and my core and bettering the flexibility I had when I was 18/19. I'm more flexible now than I was 20 years ago and that only helps you on the pitch when you're stretching for tackles or turning quickly.

What’s your favourite part of training?
I think all the lads would say the same – boxes. When we first go out we have two lads in the middle [of a group] and the rest, seven or eight, around the side and you've got to keep the ball away from the lads in the middle. There's always a little bit of banter because you're trying to nutmeg your team-mates or stitch them up! It’s always been part and parcel of the United warm-up.

The staff no doubt give you advice on your training regime, but are you able to tailor it yourself as well?
Yes, I think the more experienced you get the more you discover what's good for you and you try to manage yourself. By the time you get to your late 20s you should know your body, and what you need and don't need. You will ask the advice of the coaches as they've got all the data on how hard you've worked that week or what you did in the previous game. They might tell you you’ve done enough or say it would be a good idea to do a bit extra. It’s a partnership with the coaches really, but ultimately it's down to yourself and how you feel.

How do you continue to motivate yourself to train hard?
You’ve got to or you’ll just get swept away.
Sometimes I'm up against Carras [Michael Carrick] or Scholesy in midfield, or Anderson, Cleverley or Fletch and you've got to perform, not only in the games but in training. I think that's what sets this club apart - the training is hard and match-pace and it's always really sharp so you've got to keep going up a level no matter what age you are.

How much longer do you think you can play for?
I don't know, just as long as I'm enjoying it really and still contributing to the team and not making a fool of myself in training or in games! If you're not playing well or you feel that you're just coming up short in training, then that's the time to hang up your boots.

What do you put your longevity down to?
I think you've got to be disciplined. You’ve got to eat the right stuff, look after yourself and get your rest which I've found is more important the older I've got. Like I said before yoga has helped me as well, but it's a mixture of a lot of things and getting the right advice. Ultimately though it's down to knowing your body and knowing what's right for you./

Additional Resources:
Guide to Healthcare Schools is a resource with info on sports training classes.