Ryan Giggs wants to play with David Beckham in Olympics 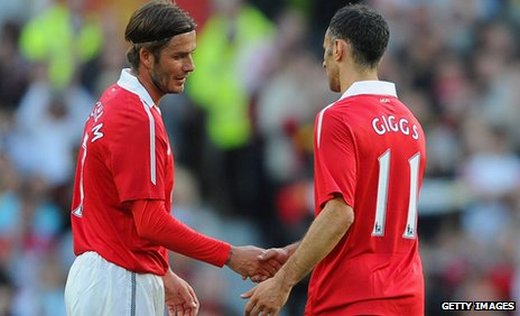 RYAN GIGGS dreams of turning out alongside David Beckham for Great Britain at the Olympics.

It would give fans the chance to see the two Manchester United legends playing together for the first time since Becks quit Old Trafford in 2003 for Real Madrid.

Giggs, said: “Becks is obviously a friend of mine and he’s a great player — and still remains that.

“I started my career with him in the youth team. Twenty years later to be still doing that would be great.”

The Welsh winger has spoken to GB boss Stuart Pearce about a place in the squad.

Giggs, 38, added: “Yeah I’ve put myself forward to be involved. Whether I get picked we’ll have to wait and see.

“Everybody is excited about the Olympics coming to London and to different parts of Britain.

“I’ve spoken to Stuart, but I think the majority of players have.”