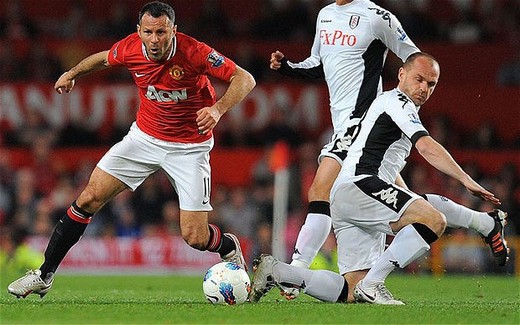 Ryan Giggs has dismissed England’s chances of winning Euro 2012. The Manchester United winger said it would be impossible to overcome the twin setbacks of Fabio Capello’s departure and Wayne Rooney’s suspension from the opening two matches.

Speaking to Italian newspaper La Gazzetta dello Sport, Giggs said Spain and Germany were the favourites, followed by France, Italy and Holland. “I can’t see [England winning], they still don’t have a coach and Rooney is suspended for the first two games.”

In a wide-ranging interview, Giggs cited Inter’s Javier Zanetti and former Arsenal defender Lee Dixon as the toughest opponents of his career. He said: “I faced Zanetti for the first time in the Champions League quarter-finals in 1999, he was the right-back and I was on the left.

‘‘He impressed with his qualities, his speed, power, intelligence and expertise. I played against him twice more and he was my most difficult opponent, a complete player.”

On the domestic front, Giggs’s team-mate Rio Ferdinand believes United's ability to win tight encounters at the business end of the season is having a detrimental effect on rivals’ morale, with Monday’s crucial 1-0 win over Fulham a case in point.

“It happens every year and at this stage of the season we know what it takes and we’ve got comfort in the knowledge that we can create chances and remain calm,” he said. “The crowd got a bit edgy at the end of the game. But if it’s 0-0 after 88 minutes we still know we’re going to create chances to win games.

“You’ve got to hold your nerve but as important as that, if not more important, is trusting each other. The team that does that the best between now and the end of the season will be the one to win the league.”

Ferdinand insists that as well as the impetus a hard-fought win gives United, it is the demoralising impact on their challengers that cannot be underestimated.

He said: “Psychologically it can affect teams, but we don’t care what happens with them, it’s about us. If we remain calm and win all our games, we’ll be successful.”