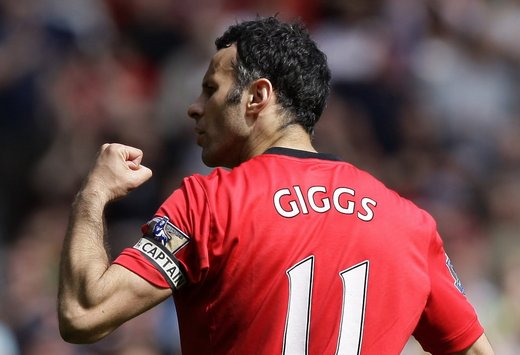 Ryan Giggs is about to make his 900th United appearance and, having signed a new one-year deal, the living legend isn't finished yet...

You’re on the verge of 900 appearances for United – have you stopped paying attention to all these landmarks?
[Laughs] I have. I never really paid attention, to be honest. The big one was obviously overtaking Sir Bobby [Charlton], so that was obviously a proud moment, but now I’ll just see where it takes me. I’m just proud. When I got to 800, I never thought I’d get to 900, and before that I never thought I’d reach Sir Bobby’s record. Every game’s a bonus now. I’m proud because 900 is a lot of games, especially with a club I’ve supported and loved for so long. I’m probably more comfortable with it now than I was a few years ago.

Are you going for 1,000 next – and playing into your forties?
[Laughs] Now that one’s a question! You can’t see it, but we’ll see.

You’re hardly a bit-part player; you tend to have a big influence whenever you’re on the field…
Yeah, when that changes, then that’s when I’ll want to stop. But I feel like I’m still an influence on and off the pitch, so I’ll carry on.

How much planning goes into how much you’re used, and how do you balance playing and sitting out?
It is hard. It’s a lot easier when you’ve got a full squad. In midfield, if we’ve got Anderson, [Tom] Cleverley and [Michael] Carrick all fit, we can usually plan it, especially early on in the season – you know those players will be playing before you. But when you get injuries, and you know the manager’s probably not got any choice but to play you, then it’s different. I probably feel at my best when I’m playing every 10 days or two weeks, but sometimes you can’t do that. You’ve got to try and keep yourself fit. I played 90 minutes against Newcastle, and four days later I played 90 minutes against City – you’re going to get that during the season. It’s not ideal and the manager probably doesn’t want that, but it’s going to happen. Hopefully we’ll get everyone back so we can rotate things and we’ll get that freshness for two games a week.

We often hear about rollercoaster seasons, but this season really has swung from highs, like beating Arsenal 8-2, to lows such as losing to City…
Yeah, we’ve had inconsistency, but I think some of the teams we’ve had to put out at times have really tested the squad to the limit. I think if we get everyone back then we’ll have a great chance of winning every competition that we’re in. You need a little bit of luck to win things in a season, but overall most teams could do better. We’re up there and we’re in a good position.

You mention inconsistency; is that to be expected given the number of experienced players who left the club last summer?
Yeah, I think so. We lost a lot of experience with Wes [Brown], Sheasy, Edwin [van der Sar], Nev, Scholesy as well [laughs]. Plus the young players coming in – new players need time to bed in. To be honest the likes of David [De Gea], Ashley [Young] and Phil [Jones] have all done well this season, as has Danny Welbeck coming back from Sunderland – he’s been in great form as well. But overall, yeah, the inconsistency could be down to the experience we’ve lost.

Scholesy’s comeback took a lot of people by surprise; you know him better than most – were you aware he was missing playing?
I chatted with him all the time because he was here. I’d just ask him how the coaching was going, because I was doing my ‘A’ licence at the same time. Personally, I thought he’d retired too early – and a lot of people did. Scholesy probably thought he’d made up his mind and when you’ve done that you can’t really change it, but you were seeing him still around the place and training. You’d speak to the Reserves and he was still the best in training with them, so he still obviously felt he could do it. Nobody was going to disagree with that, and I think it was a massive boost for everyone before the City game.

What will he add to the squad for the run-in?
So much – the experience he’s got, the qualities he’s when these young players are either injured, aren’t playing, or have lost form. That’s when, really, you need to help them. When they’re flying, you just let them get on with it, but if you see them losing confidence or maybe looking a bit down if they think they’ve not played well, that’s when you help them. That’s when your experience comes in because we’ve all been there. When I was younger I looked up to the likes of Bryan Robson and Steve Bruce, who helped me a lot.

How do you impart your experience and how can you tell when support is needed?
It’s just something that you can see. It’s that next tier from the coaching staff to the dressing room – there are things that you see first-hand. It’s especially so for me because I don’t play every game, so sometimes you’re watching games and you see things that can help young players. It might be the littlest pointer that helps them, but ultimately it’s just reminding them what they’re good at, about the importance of training hard, and to put their quality in at training. And sooner or later, when they have a little bit of bad form, it will all come back to them.

Manchester City have been the Premier League’s pace-setters for most of this season – what have you made of their recent emergence?
With the quality they’ve got, we knew that they were going to be right up there. But as well as putting all those players together, they needed to have that consistency which you can see they’ve developed now because they’re top of the league. We know that it’s a challenge, we know what lies ahead… now we’ll just have to see what happens.

Are they here to stay as challengers?
Oh, I think so. You can’t ignore the money and the quality they’ve got, and their strength in depth. It’s just keeping all those players happy. They’re obviously trying to lay the foundations for 10, 20, 30 years… whether it happens or not we’ll have to wait and see.

Is there more pressure on them to win the league this season because they’ve invested so much?
Yeah, I think in most people’s eyes they’re favourites because they’re top of the league, and because of the quality they’ve got, and the football they played early season. It’s just down to which team handles it best. Tottenham are up there as well. You always need that little bit of luck with injuries and decisions – hopefully it’ll go for us.