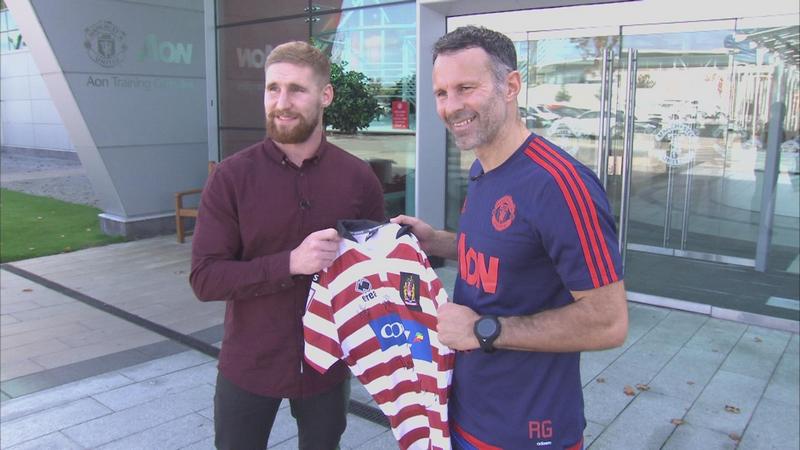 Ryan Giggs backed a Wigan Warriors win in the Super League Grand Final during a chat with Sam Tomkins.

Tomkins himself will be back playing for the Cherry and Whites from next season after a spell in the NRL but on Saturday, he like Giggs will have to make do with a watching brief.

Manchester United legend Giggs believes the clash with Leeds Rhinos will see the two best teams over the course of the season battle it out.

However, this is one weekend where he will not spend time at Old Trafford.

"We've got the weekend off and we don't get many days off, so I'll be spending it with the family," said Giggs.

"Obviously, it's a great game and I'm a Wigan fan so I'll be tuning in and cheering on Wigan. Wigan and Leeds are probably the two best teams across the season, so I'm hoping for a good final."

Giggs explained that his love of rugby league came from watching his father play regularly for Swinton when he was a child.

"My dad was a rugby league player so it started from when we moved from Cardiff to Swinton, who my dad played for," he explained.

"So from then, about the age of eight, until I started playing football regularly, so for about four or five years, I was home and away watching Swinton.

"Going to the likes of Batley, Dewsbury, Hunslet - all the glamorous places - and then once rugby league is in your blood, then that's it for the rest of your life.

"My dad took me to Great Britain v Australia in about '82 or '83 and that was at Central Park, Wigan were obviously a great side in the '80s and even though I was a Swinton fan, my love for Wigan started then."

As for Saturday though, the United assistant manager is expecting a tight affair and thinks it is too close to call.

"It's so close to call because they're two very good teams and in form as well. I'm hoping for a Wigan win but I think it'll be very close," said Giggs.