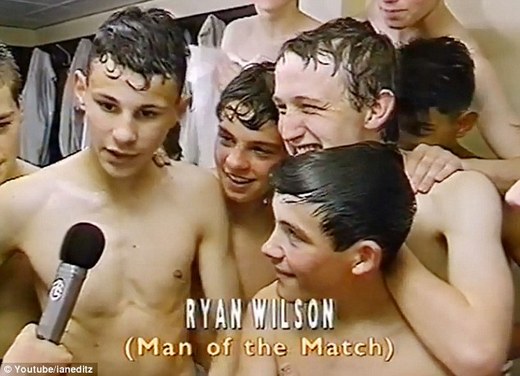 Twenty-five years ago TV cameras didn’t capture every moment of significant football action but we should be thankful ITV sent a crew to Anfield to film the final of the Granada Schools Cup in 1988.

For the record, Salford beat Blackburn 3-2 with a winning goal coming in extra time at the Kop end. It was the second successive year that Blackburn had lost in the final but in the dressing rooms and indeed the boardroom that night nobody really talked about that.

Instead they talked about Ryan Wilson, the 14-year-old who had won the game for Salford. He didn’t score but his leggy, direct running provided the assists for each of his team’s goals.

“Had our scouts known about him, we would definitely have tried to sign him,' said Liverpool chief scout Ron Yeats, who presented the trophies that night.

Young Wilson, of course, was the teenage footballer who was to become known as Ryan Giggs. Wilson was his father’s name, Giggs his mother’s maiden name.

If you watch footage of that night at Anfield, Giggs is instantly recognisable. The upright gait, the way he seems to glide over heavy turf, the unwillingness to fall over. A brief post-match interview is amusingly characteristic, too.

'I was supposed to play for United under-15s tonight but I wanted to play here as the pitch is better,' he says with a glint of mischief in his eye.

On the mic: Ryan Giggs (then Wilson) was Man of the Match as Salford won the 1988 Granada Schools Cup 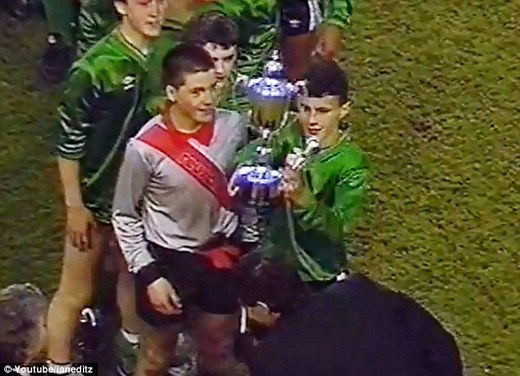 Get used to it: Giggs (right), aged just 14, lifts the cup with a goalkeeper team-mate at Anfield

Giggs was always a bit of a comic, a dressing-room mimic. He still is. He was always a natural, easy footballer, too. Some players look as though they work hard in thrall of their art. Giggs never had to.

Today he is 40 years old. Still he plays on and we should all be thankful. The Welshman is a link to the past, not only in the way that he plays but the simple, uncomplicated way that he has always viewed his career.

He could have left United on a number of occasions. Italy always attracted him. Fundamentally, though, he never really wanted to.

I am not fortunate enough to say that I saw him play regularly at the start. Those who did were never in doubt.

'His was a God-given talent,' was the succinct summation of the great United youth coach Eric Harrison.

Happily, though, I have watched him closely over the last 13 years, principally with United but also, for a time, with the Wales national team. It sounds simplistic, but he hasn’t changed much. His football has morphed, of course, as time took away his searing pace, but little else has.

There is no point pretending that revelations about his private life didn’t surprise everybody when they emerged in 2011. Briefly the skies above him darkened. Some suggested that his hair greyed overnight.

He snarled at me in the interview area after the Champions League final of that year – upset at my newspaper’s coverage of the scandal – and I wondered if that signalled the end of a working relationship. 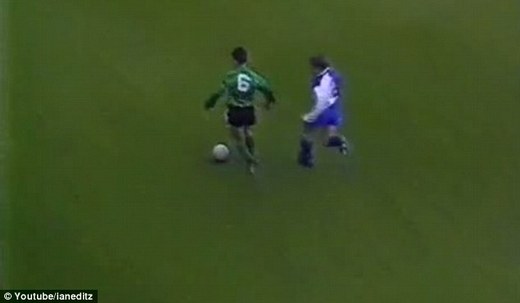 Fledgling: Giggs (No 6) showing early signs of his customary dribbles in the final against Blackburn 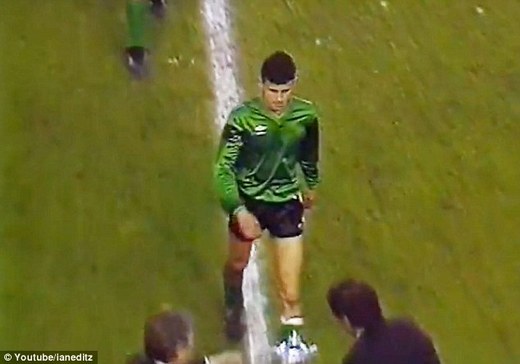 Familiar sight: A young Giggs walks to collect the trophy after a man-of-the-match performance for Salford

At the start of the following season, though, our paths crossed in a corridor at Goodison Park and a smile and nod of the head indicated that perhaps all would be well.

That, in many ways, has been the essence of Giggs, as a player and a person. Uncomplicated and remarkably real for a bloke who has spent 25 years in an industry designed for fakery.

Several years ago, for example, when Giggs was suffering at the hands of a Stretford End that believed his time was up – proof that it wasn’t all easy street for Giggs at Old Trafford – one journalist wrote a piece suggesting he deserved better.

The very next day, Giggs called him. 'I just wanted to say thanks,' he said.

Proof, then, that some footballers do hear the murmurings from the terraces and, indeed, that some haven’t lost their grip on their manners.

Giggs will play his share of games this season. United’s manager David Moyes continues to need his dexterity, his experience and his calm. It will be on the coaching fields that we will grow used to him over the years, though, and he will be valuable, there, too. He has always been an easy communicator.

A career that started as a substitute in a game against Everton in March 1991 has not brought Giggs everything he desired.

He never played for Wales at a major tournament and the night Mark Hughes’ team lost at home to Russia in Cardiff in a Euro 2004 play-off second leg will perhaps always stay with him. He missed an open goal that night, too. Further proof that he was always human.

Few will ever touch us the same way, though. It has always been hard not to like him. Even the great patriarch Sir Alex Ferguson couldn’t stay angry with him for long.

Having received a mouthful from Giggs during a game at Watford back in 2006, Ferguson delivered a typically unflinching appraisal of his team’s performance in the dressing rooms at Vicarage Road.

As he went to march out of the room, though, his features softened as he turned to Giggs and said with a smile: 'And you... don’t ever speak to your grandad like that again!'