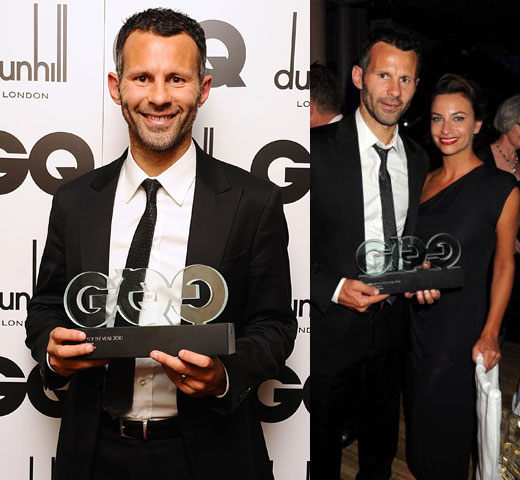 Manchester United and Premier League legend Ryan Giggs has just picked up the latest in a long line of accolades - the GQ Sportsman Of The Year award. To celebrate, he shared some of the best moments of his 20-year career in this exclusive interview for GQ...

Picking the right ball
"Up to the age of 13 I played rugby and football and enjoyed them both. My dad played rugby league professionally and I was pretty good myself and just before I signed for United, I was playing rugby for Lancashire and was about to go for trials with Great Britain. But I set my heart on playing football and once United wanted to sign me at 14 that was it."

Remembering the first time
"Making my debut was such an amazing moment. You play for the youth team, then the reserve team, but you never really think you are going to make the first team until it actually happens."

Refusing the fame academy
"When I first broke into the first team, I loved all the attention. But I can honestly say I hated the press intrusion that went with that lifestyle. Being followed home after training, appearing in the papers, having your private life on show. I never wanted to live like that."

Learning from the best
"I've known Sir Alex since I was 13 and at first he was a bit of a father figure for me and I looked up to him. Now we have a much more balanced relationship. He'll ask my advice on what is going on in the changing room, he'll discuss how he is going to use me in different games… It's a much more grown-up relationship. Who will retire first? Me."

Keeping the ball when things go wrong
"The only reason I went on that run in the 1999 FA Cup semi-final against Arsenal was because I was having such a dreadful game. I'd come on as sub, given the ball away every time I got it, so in situations like that I always try and do what I do best which is dribble with the ball and see where it takes me. Fortunately it took me all the way to the goal."

Beginning life at 30
"When you first start off playing at 17, 18, you don't have any pressures and you play with total freedom. Then you have a bad game, something negative gets written about you and then you start to worry about it. But when I turned 30, I decided to ignore all that and just enjoy the game. I don't let things bother me as much and I feel better for it. I was settled with my wife Stacey, had my first child, and I guess it is no coincidence that since then has been my most enjoyable period as a footballer."

Becoming Lord Of The Fishes
"I started doing yoga about six or seven years ago as a way of helping me with my hamstring problems, loosening up my back and giving me strength. I did it, hated it because it was so hard, but the feeling that I got afterwards was brilliant and is definitely one of the reasons I've been able to keep playing."

Winning the big one
"The best feeling I've ever had on a football pitch would have to be when we beat Bayern Munich in the 1999 Champions League final. We were two minutes away from it being the worst night of our lives, and then in that time it became the best moment. That season we had never given up on a game, but it did feel like the run had come to an end. We hadn't played well, hadn't created much and I did believe the game was over."

Equalling Sir Bobby Charlton's appearance record.
"That was the proudest moment in my career. It was against Wigan, I was on the bench, but the manager said I could come on and win us the game. It was my 758th game for United, I scored and we sealed the league title. That ten days, from equalling the record to breaking it against Chelsea and winning the Champions League, was perhaps the best period of my career."