Ryan Giggs could be trailblazer for veterans 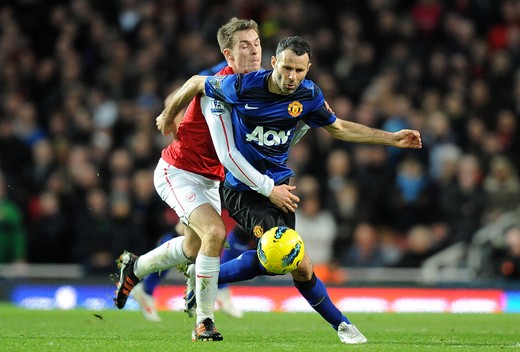 Evergreen Manchester United winger Ryan Giggs believes there will be more Premier League players extending their careers into the late 30s and beyond due to the rapid advancement in sports' science.

A long-time practitioner of yoga, Giggs is heading rapidly towards his 900th United appearance and even though he has already passed his 38th birthday, there is an increasing likelihood he will sign another contract extension for next season.

Currently, Giggs' former United team-mate Teddy Sheringham holds the record for the oldest outfield player in Premier League history, having made his final appearance for West Ham in December 2006, 95 days short of his 41st birthday.

Going further back, there have been odd instances of over-50s turning out, with Sir Stanley Matthews being the most obvious example.

Giggs feels it is stretching it a bit to believe that feat could be emulated.

However, additional research into nutrition, better management of injuries and greater emphasis on the quality of training all help to prolong careers.

"I don't think 50 but you will probably find a lot more players in their late 30s or even their 40s if they look after themselves," the veteran Welshman told MUTV.

"Even though the game is getting quicker, you still need players with a good brain. Yes, there are still quicker players around but that quickness of the brain gives you an extra yard."

The great unknown for any player is their inner desire to keep pushing themselves through every pre-season, which even Giggs admits can be a struggle, and training session so they can deliver the best performances possible on matchday.

And, a bit like manager Sir Alex Ferguson, Giggs gets that from the challenge presented by an ever-growing list of younger team-mates.

"You have to remain motivated, otherwise you get swept away," he said.

"You have to raise your game or you are not contributing and become a waste of time.

"It's not just about performing in games but also in training.

"You have to keep going up a level, no matter what age you are."

It is one of the reasons why Giggs cannot put a date on his retirement, especially now Paul Scholes has returned to the fray, having decided coaching does not fulfil him in anything like the same manner as being on the pitch for real.

"I don't know how long I can keep playing for," said Giggs.

"As long as I am enjoying it and still contributing to the team, not making a fool of myself in training or games.

"If you are not playing well or feel you are coming up short in training, that is the time to hang up your boots."