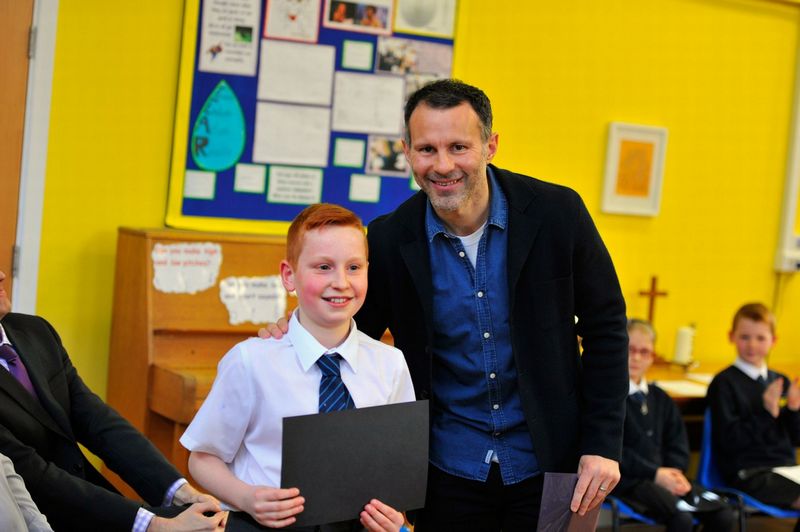 Children at St Mark's Primary School in Worsley were asked to design a new addition to the children's menu at George's Dining Room and Bar
Manchester United legend Ryan Giggs has congratulated the young winner of a competition to design a new dish for his restaurant in Worsley.
George’s Dining Room and Bar asked children at St Mark’s Primary School to design a mouth-watering meal for the children’s menu.
The winner was 11-year-old Luke Armitage, a year six pupil at St Mark’s, who was praised for his Chocolate Volcano Fondant.
Assistant Red Devils manager Ryan, the co-owner of George’s, visited the school to announce the winner and runners up. And the atmosphere was at fever pitch when he made a guest appearance at a special assembly to present Luke with a certificate and shake his hand.
Announcing the winning dish he said: “I like the sound of this.”
Children got to work designing their dishes over six weeks. Luke’s dish will be featured on the new George’s menu when it is launched on Friday February 26, with half of the sales from his dish going to the St Mark’s parent teacher association as a thanks to the school.

Ryan Giggs has congratulated the young winner of a competition to design a new dish for his restaurant in Worsley.Source: Manchester United - Manchester Evening News

Staff at George’s agreed that the volcano fondant will be a popular addition to the menu and Luke will be invited to George’s with his family for a celebratory meal and no doubt to try out his dish.
In second place was seven-year-old Evie Johnson, with her Butternut Squash Chocolate Cake and in third place was eight-year-old Phoebe Tuck with her Spicy Chicken Salad.