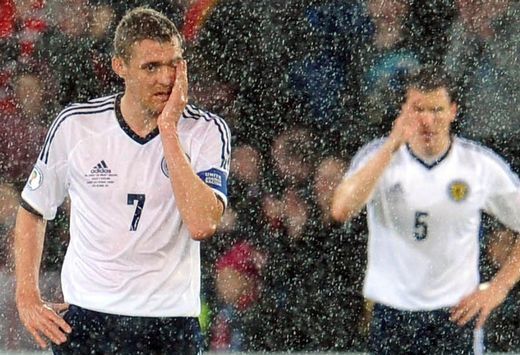 Ruud van Nistelrooy fears Scotland skipper Darren Fletcher is doomed to a legacy of failure on the international stage.

With Craig Levein’s team odds-on to miss out on another World Cup finals, the Dutchman believes his old Manchester United team-mate is suffering from Ryan Giggs syndrome.

In layman’s terms that means always being on the outside looking in when the big boys of international football gather for the latter stages of the major competitions.

Van Nistelrooy’s respect for the Scotland captain knows no bounds, having watched him grow from boy to man in the five years they shared an Old Trafford dressing room.

But the former Holland superstar feels Fletcher, below, could forever be guilty by association with Scotland’s flops and suffer the same fate as Giggs who endured a catalogue of calamities as skipper of Wales.

Van Nistelrooy said: “Hopefully for Darren and for Scotland he’ll get the chance to lead his country out in a major tournament.

“It would be a pity for him if Scotland continued to fail as he would be just like Giggsy.

“But he can’t control that – what he can control is his daily work and sacrifices.

“I just hope they get to one of these finals because Scotland is a nation you want to see there.

“Darren is an example of where Scottish football needs to go to. He’s a bright kid, he’s got good technical ability, his heart is in the right place and that’s the future for Scottish football.

“If he continues like that, his career will be fantastic.”

Van Nistelrooy retired from football in the summer after a spell with Malaga but has kept a close eye on Fletcher’s recovery from the illness that threatened his career.

The same courage and character he saw at first hand as Fletcher became a first-team regular at Manchester United has allowed him to recover and lead his country once more. Van Nistelrooy said: “I knew about Darren’s illness and I’ve been watching his comeback with interest.

“It was a big thing to come back from so I was glad to see him return to his old level, looking as strong as ever.

“If anyone could come back from such a serious thing, it’s Darren. He always trained hard and was always serious about his football. He was a very good professional.

“When I first met him he was a promising youngster. Everyone at United told me, ‘that’s the kid for the future’. He duly came through.

“He was quiet back then but you could tell he kept his ears and his eyes open. He didn’t say much but worked really hard. That’s why he commanded the respect of the dressing room.

“He was always working and never moaned.

“He was just enjoying the moment. That’s how he worked himself up and look where he is now.

“It was difficult to judge how far he would go. You could see he was intelligent, knew what he wanted and was a hard worker.

“Those are the things I saw back then and now he’s grown into an inspirational captain.

“I haven’t seen a lot of Darren personally, although I did see him when Scotland played Holland. It’s always great to see former team-mates you had a good relationship with, especially now he’s in good shape and good health again.”

Van Nistelrooy rates Fletcher one of the best players in the world game both in terms of ability and approach.

He said: “He’s definitely up there with the best. I’ve played with many great professionals and he’s without a doubt one of them.

“There’s nothing you can knock him about, nothing that he doesn’t do. In fact he does everything you should do.

“He’s preparing himself day in day out so I think he’s set for a long and great career because of that.”

Van Nistelrooy believes Scotland have taken a huge stride forward by appointing his countryman Mark Wotte as SFA performance director and believes he is the perfect choice to plot a brighter future by schooling youngsters on the Dutch model.

He said: “I don’t have any information on why Scotland struggle but you hope some development has started.

“You must begin by going through the ranks and educating young kids into great football players.

“If you can invest in that then in the end it will pay off. Hopefully that’s what’s happening.

“Having Mark there is a good thing. People who were working in the Ajax youth system are there too.

“We know a lot about that and the number of players they’ve produced with certain methods which Mark knows of.

“I think it will definitely produce a great Scottish future.

“I don’t know Mark personally but I know about his career and how he works. He’s a developer, he’s always been in organisation and development of talent.

“That’s what he’s doing in Scotland and that should pay off for the national team.”