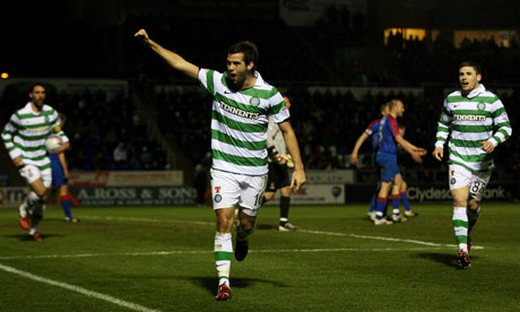 "Joe is a bit like that. He sort of cruises through games, keeps the ball well, and some fans maybe don't appreciate that fully.

"But having trained with him and played with him I know his qualities."

Ledley turned his back on moves to the English Premier League and Italian side Roma to join the Hoops from Cardiff in the summer.

There were plenty in his homeland who questioned his ambition - but Giggs wasn't one of them.
He believes the Hoops, and the expectation placed on their stars to win every week, is the perfect place for Ledley to continue his development.

Giggs reckons that can help him become one of the bedrocks in a new generation of Welsh stars.
After tomorrow's Co-operative Insurance Cup Final Ledley joins up with Gary Speed's squad ahead of Saturday's Euro qualifier with England in Cardiff.

Giggs - 64 caps in 16 years - said: "I've seen bits of Joe at Celtic that have been on TV but I've also seen Joe at first hand with Wales.

"He's obviously at a very good team in Celtic and is a tremendous prospect. He's still only young and learning the game.

"But I think it's good for him that he has to deal with the pressures of playing for a club the size of Celtic at this stage of his career.

"When you're there you have to win every week. It can only benefit and help you as a player and from what I've seen he's handled it all really well.

"Now I hope as a fellow Welshman that his game can progress and with the likes of Aaron Ramsay and Gareth Bale he can have a good career playing for Wales."

Ledley was suspended for the Scottish Cup replay win over Rangers and forced to sit out the SPL victory over Hamilton after Ki Sung-Yeung continued to impress alongside Kayal.

But the Welsh ace returned to the starting lineup in Wednesday night's win in the Highlands.

He'd only bagged two goals before that, with his last way back on November 6 against Aberdeen.

Giggs believes Ledley will never get fazed and will always be a trusted ally for his gaffer.

He added: "The thing with Joe is he's lucky that he can play in a number of positions. He's also comfortable on the ball and has got such good balance.

"He's just got to keep working hard, which I know he will, and he'll progress to become a top top player."