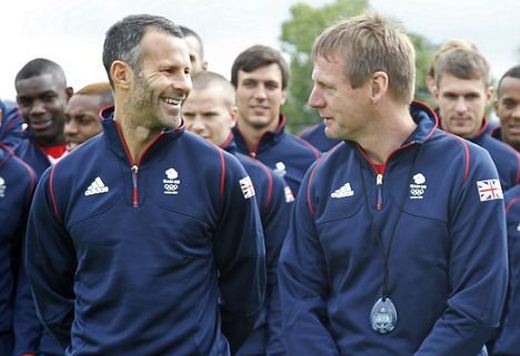 Stuart Pearce has hailed the influence of Team GB captain Ryan Giggs in the run-up to their participation in the forthcoming Olympics.

Pearce has taken his 18-man squad to Spain for a training camp ahead of friendlies against Mexico and Brazil before they begin their campaign against Senegal at Old Trafford on July 26.

And ahead of British football's first participation in the Games since 1960, manager Pearce was quick to pay tribute to Welshman Giggs, competing in his first international tournament.

'He has all the credentials and he's been absolutely fantastic,' Pearce told Radio Manchester.

'We've been out in Spain for five or six days, he has the full respect of his team-mates and his form last season was very good for Manchester United.

'We've had him as part of all our coaching meetings and we've been getting great feedback from him on the players.

'To know how the players are feeling is very important.'

Giggs is one of the overage players selected for the Games alongside Craig Bellamy and Micah Richards, a surprise choice in some quarters.

Pearce admitted to being slightly irked that the Manchester City defender cannot be selected as an underage player after he turned 24 last month.

Nevertheless, Pearce believes Richards will be a key figure in their campaign and plans to use him in the heart of defence rather than in a full-back role he usually occupies under Roberto Mancini.

'It's a shame with Micah Richards that he's an overage pick,' added Pearce.

'He misses out on being an underage player by a few months. I see him playing at centre-back than at full-back to be honest.'

Pearce has said his squad are 'really excited' about the Olympics and thinks their friendly with Brazil on July 20 at Middlesbrough's Riverside Stadium will give an indication of how far they have progressed.