Out of office: Ryan Giggs on his passion for yoga 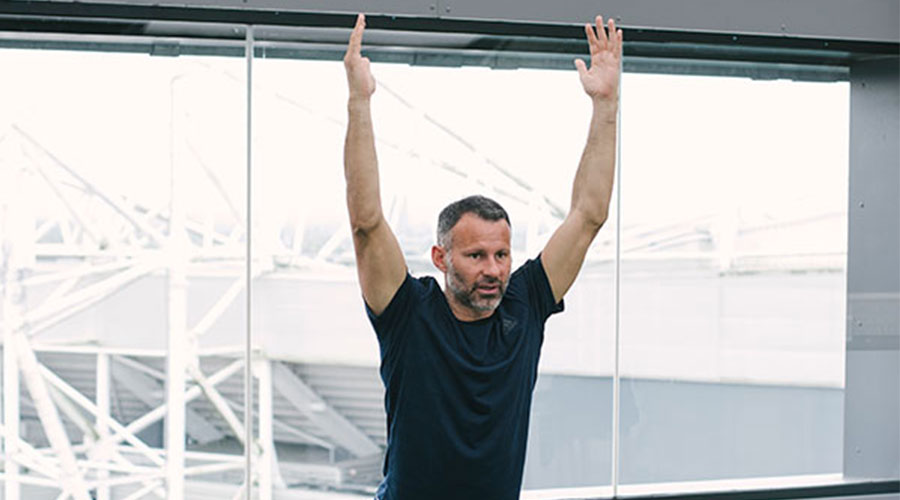 Ryan Giggs goes through his yoga exercises against a backdrop of the Old Trafford stadium he graced for many years with Manchester United © Christopher Nunn. Read original article at FT Magazine.

Ryan Giggs is deftly poised in the yoga posture of adho mukha svanasana: an inverted V-shape known to lunch-break yoga devotees as the “downward-facing dog”. It seems strange to observe the former Manchester United player so still. From his debut as a swift, slaloming 17-year-old winger in 1991 to his final game as an inventive 40-year-old midfield playmaker in 2014, Giggs energised matches with his intelligent movement and slinking dribbles that, in the poetic words of his manager Sir Alex Ferguson, left opponents reeling with “twisted blood”. However, he credits the longevity of his career to the pursuit of yoga.
“I started yoga after missing a big Champions League game against Bayern Munich [in 2001] through injury,” explains Giggs, 43. We are stretching side by side on the rooftop Astroturf pitch at Hotel Football, a £24m development co-owned by Giggs that overlooks Manchester United’s Old Trafford stadium.
“I went on a dribble in training and pulled up with a hamstring strain. I’d had similar injuries before and I remember sitting in my bedroom thinking, ‘This can’t go on.’ So I tried everything. I changed my car [buying an automatic to reduce leg strain]. I changed my bed for better posture. And I started yoga. It helped me get another 10 years out of my career.”
Kept supple by yoga, he went on to win another 17 pieces of silverware — half of his record haul of 34 major trophies, which includes 13 Premier League titles, four FA Cups and two Champions League trophies. He retired as the most decorated British footballer in history. “Yoga was first about injury prevention, but later it became about recovery. The day after a match, the adrenalin would still be in my body. But the following day, when I got out of bed, everything would hurt, so I would do yoga then. It made me more aware of my body.” Photographs © Christopher Nunn
As Giggs shows me some toe-touching sun salutations, I can’t help glancing at his sockless feet. With them he scored goals that triggered global tidal waves of celebration among his club’s estimated 650 million fans, carrying him through a record 963 appearances. Perhaps his yoga classmates have similar reflections. “I have kept the yoga going in my local village in classes at the school hall on Tuesday and Thursday,” he says. “It’s close to where I grew up [in Salford], so most people know me but some did a double take when I arrived. But I am just part of a group of 25 people. I was never hassled for an autograph, so I could just enjoy being there.”
Having served as a player-coach for David Moyes, Ferguson’s successor at Manchester United, Giggs temporarily took charge when the Glaswegian was sacked in 2014. He then spent two years as assistant manager to Louis van Gaal but when José Mourinho arrived in 2016, Giggs departed. He had hoped for the top job himself but the club opted for the more experienced Portuguese, and Giggs decided to seek “a new chapter and a new challenge” rather than remain as an assistant — a move Mourinho praised as “brave”. Giggs is currently enjoying a grown-up gap year, balancing his business commitments and football management research with time with his children, Libby, 14, and Zach, 10.
“It felt like the right time for a change when José came in. I wanted to do things I hadn’t done before. I went straight into covering the European Championships for ITV and travelled to India to play in a futsal [a type of five-a-side football] tournament. I had never been to India or played futsal, so it was another new challenge. I hadn’t even seen my son play football at the Manchester United Academy; we always had games at the weekend, so I finally did that. The two years under Louis were hard. Not only because his coaching style was different, but because it was mentally taxing, as he was very demanding. But what a brilliant apprenticeship. I feel so much more prepared to go into management myself one day. I feel very relaxed now. I don’t think I realised how much pressure I put myself under during my career.”