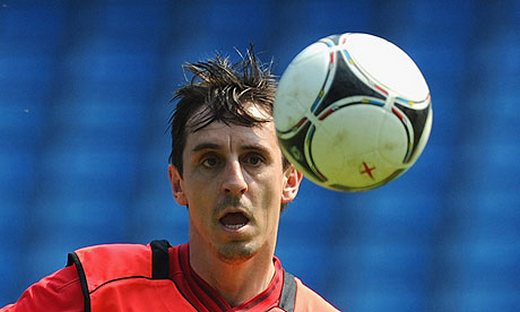 Gary Neville, the England assistant coach, has urged fans to back the British Olympic football team and the Football Association to commit to fielding a team at future Games.

The birth of the British team was protracted in the face of opposition from the football associations of Scotland, Wales and Northern Ireland.

But Neville, the former Manchester United defender, said it could be an important part of the revolution promised by the FA through the new national football centre at St George's Park and a greater emphasis on a consistent style of play through the age groups.

"I think it would be a great shame if it was a one-off. Looking on it selfishly as a member of the England coaching staff, the opportunity for young players to play in a major tournament and see how they perform against other top players in a competitive environment can only be good," he said.

"In the Premier League we've now got a far better technical product and we're now setting ourselves up for the development of the English game. We're putting greater emphasis on the technical aspects from four, five or six. These are long-term projects."

London 2012 organisers had to remove 500,000 tickets from sale at venues around the country after conceding that the men's and women's football tournaments would not sell out.

But Neville said he expected excitement to build if Team GB, led by Ryan Giggs as one of three overage players, won their group matches and expected fans to be enthused by Friday's friendly against Brazil at the Riverside.

"I remember how in 2004 Gabriel Heinze couldn't wait to get away to play for Argentina. They take it incredibly seriously and we have been fairly cynical towards it," he said. "I have been convinced for some time that once people see the quality of the teams, that will change. I think the euphoria will build once the team starts playing. If we get a couple of good performances, the support will follow."

Neville said Giggs would take his role at the Games, captaining a squad of 18 players of which 15 are under 23, "as seriously as anything he's ever done".

"He is ecstatic about the opportunity that exists for him to lead a Great Britain team and the opportunity to play in a tournament, [something] he never had the chance to do with Wales," added Neville of his former Manchester United team-mate.

He said that David Beckham, a close friend and another former team-mate, had been "hit hard" by his omission from the squad by the coach, Stuart Pearce.

"I know he's disappointed and I'm disappointed for him as a friend. He wants to be part of this squad. But that's sport. If you look at the rowing team, the cycling team or the swimming team there will be athletes who have missed out," said Neville.

Neville was speaking as part of a campaign to encourage fans to plan their journeys to the Olympic football stadiums carefully.

"The important message I want to get across from a logistics perspective is that, if fans think it will be the same as their usual trip to Wembley or Hampden Park, they will have a shock if they don't check the travel arrangements," he said, urging ticketholders to check the Get Ahead of the Games website.