Manchester United mates drum up a surprise for Ryan Giggs 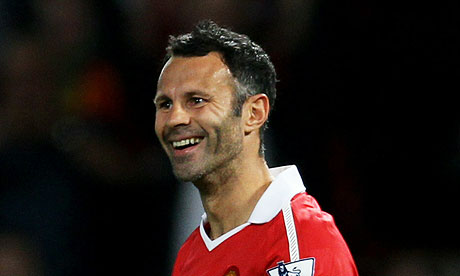 RYAN Giggs got a real bang out of his 20th anniversary as a Manchester United star.

And staff even installed it at his home while Giggsy, 37, was 200 miles away playing in United’s 2-1 defeat at Chelsea.

Drums have become the dad-of- two’s favourite since he developed a love for classic rock bands such as The Who, Deep Purple and Black Sabbath.

A club source said: “The kit was there, all set up, when he got home from the Chelsea game.”

“The lads all wanted to get him something to mark the special occasion and it certainly beats a cake. Ryan loves his music, especially the drums. It’s a good job he’s got a bit of distance between him and the neighbours.”

Since then, he has racked up 11 Premier League titles, two Champions League trophies and four FA Cup medals in 863 appearances.

And he has never been sent off for United.

He and wife Stacey live in Worsley, Manchester, with children Libby, seven, and Zach, four.

The source added: “Ryan Giggs will absolutely love having his own set of drums.”