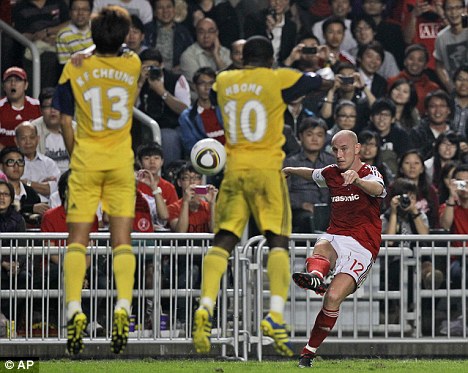 The 35-year-old has come out of retirement to train with the club for a week and could sign a long-term contract.

The former England international then hit the bar with a spot-kick six minutes later before his side scored in injury time to win the game against TSW Pegasus 2-1.

'I enjoyed the goal. It was a nice goal. If I missed, maybe Mr Lo would kill me,' Butt joked after the first division game, referring to the chairman of South China, Steven Lo.

'I enjoyed my time. There’s a lot of things we need to discuss. A lot of things are positive. Hopefully the fans enjoyed seeing me play,' Butt said. 'Everything’s good.'