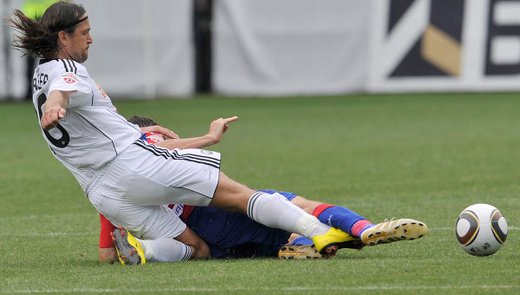 Manchester United players Ryan Giggs and Nemanja Vidic are likely to refuse their invitiations to a testimonial match for ex-Russia defender Vadim Evseev next month, a spokesperson for the club told RIA-Novosti on Friday.

Evseev announced Wednesday that he had invited both players to attend on May 14, with Giggs possibly playing and the injured Vidic watching from the stands.

“Vidic is injured, but he will come - not playing, of course, just watching." Evseev told Russia’s Radio Zenit station.

"Ryan Giggs might be unable to get here on time because on May 13 Manchester United has an away game.”

However, according to Man United, both players are more likely to attend the club’s annual awards ceremony.

"I don’t think any of our players are going as it is our Player Awards dinner on that day," Manchester United spokesperson Karen Shotbolt said.

Evseev achieved fame after shouting obscenities into the camera after his Russia team beat Wales in 2003, although Giggs was not in the Welsh lineup for that game.

Anzhi striker and triple Champions League winner Samuel Eto’s together and Anzhi director Roberto Carlos are expected to lead the Rest of the World team against a Russia side composed of Evseev’s friends and local celebrities.

Evseev’s former Lokomotiv Moscow teammate Branislav Ivanovic, who is unable play for Chelsea in the Champions League final on May 20 due to suspension, is expected to join them, Evseev said.

Evseev, 35, retired in December after a career spanning 16 years, including six seasons at Lokomotiv Moscow, whose ground will host the match.