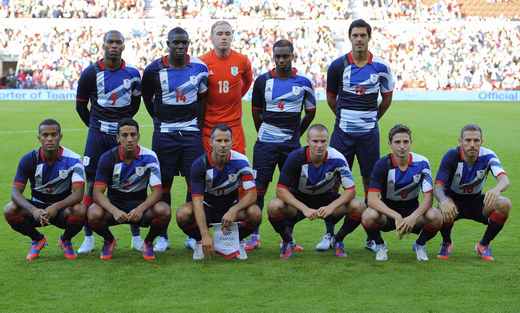 Ryan Giggs revealed he was "very proud" to captain Team GB, the first since 1972, in their 2-0 friendly loss to pre-tournament favourites Brazil.

Despite an underwhelming performance against a strong Brazil side, the 38-year-old was delighted to wear the captain's armband against Mano Menezes' men.

"Obviously [I'm] very proud," Giggs told the BBC. "It was a good game to be involved in, obviously against Brazil.

"It's always special when you play against Brazil. But to captain and be involved was great."

A Sandro header and a Neymar penalty condemned Team GB to a 2-0 defeat in what was their first official game under manager Stuart Pearce.

And with just under a week to go before Pearce's squad kick-off their Olympic 2012 campaign against Senegal, Giggs believes the team will be ready in time and can only get better from here on in.

"It was great preparation for us," the midfielder said.

"We knew it was going to be tough. They're probably ahead of us fitness wise.

"You can't really kill them running every day like what we normally do in a pre-season. But equally you need to get some sort of a base fitness, so it's been tricky balancing the two but this game will have brought us on again and we've got another six days or so to get ready for Senegal.

"We've only been together nearly two weeks. We're definitely getting better and we'll improve as the tournament goes on so it was a good benchmark for us today."

Team GB were outclassed for much of the game against Brazil but the Welshman feels that the younger players in the squad would have learnt much from the experience and have the quality to impact on the tournament.

He said: "We've learned that we've got a lot of talent in the dressing room.

"Everyone is comfortable on the ball and we will get better. I've seen that in training, I've seen the quality in training and we've seen in parts tonight.

"It's always disappointing to lose a game but we'll take the positives from it."