July 30, 2012
Posted by Steven Tan | Source from The Canadian Press 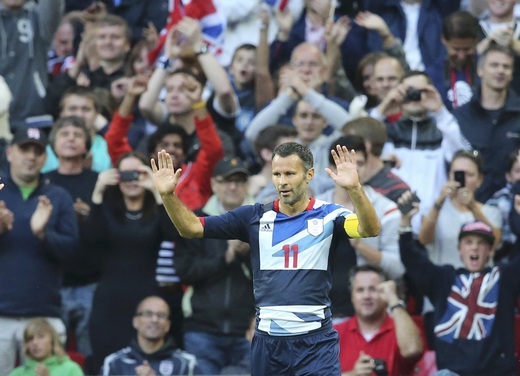 WEMBLEY, England - Ryan Giggs got his goal and Britain got a 3-1 win over the United Arab Emirates on Sunday to keep its Olympic title dreams alive. With Prince William and David Beckham watching on, too.

The 38-year-old Giggs capped a slick buildup with a 16th minute opener to become the oldest goalscorer at the games, which is also the Welshman's first major tournament.

Rashed Eisa nearly spoiled the party for 82,239 fans at Wembley Stadium with an equalizer on the hour. But Giggs' replacement Scott Sinclair scored in the 73rd before Daniel Sturridge's perfect lob capped what turned out to be an emphatic victory.

Britain's first Olympics victory in 52 years also marked a return to winning ways at Wembley, where its last appearance in the tournament was marked by a 5-3 loss to Denmark in the 1948 semifinals.

"We showed a lot of character," Giggs said. "For a team that has not been together too long we pulled together and to get goals from two subs also is very pleasing."

As Beckham and British royalty watched, the hosts joined Senegal atop Group A with four points to eliminate the UAE. Uruguay has three points after losing to the Africans 2-0 at Wembley earlier on Sunday.

Giggs lifted the hosts into the lead after a smart setup that ultimately finished with the Manchester United winger heading Craig Bellamy's cross into the area down off the ground and beyond the reach of goalkeeper Ali Khaseif, who was superb until Britain broke out in the second half.

Giggs, whose native Wales has never managed to reach a major tournament during his playing days, surpassed the 88-year-old record held by Egypt's Hussein Hegazi, who was 37 at the time, as the oldest scorer in the competition's history.

"I'm still disappointed not to play in a World Cup or European Championship but to play in a tournament is a wonderful thing, I'm very happy to do it and I relish it," said Giggs, who will captain the team at the Millennium Stadium in his native Wales next.

Even Manchester United teammate Wayne Rooney was pumped up by Giggs' feat, tweeting "Yes giggsy" after the goal.

Giggs' achievement was nearly soured by the passive second half start by the hosts, as Eisa received alone in the middle before bursting forward to go clear on helpless goalkeeper Jack Butland.

Butland kept Britain even with saves to deny Ahmed Khalil before Sinclair scored two minutes after coming on for Giggs, poking into the empty net after Khaseif spilled Bellamy's swerving cross.

Sturridge, who replaced Marvin Sordell after the break, held off two defenders to reach Tom Cleverley's through ball and flick over Khaseif from outside the area after the UAE 'keeper came off his line with thoughts of challenging the Chelsea striker.

Britain now has a tough match against Uruguay in Cardiff on Wednesday, needing to avoid defeat to progress to the last eight.

"It's still all to play for," Britain coach Stuart Pearce said. "Each game is a cup final in the group stage and we felt going into this game it was a must-win. And it's the same with Uruguay now."