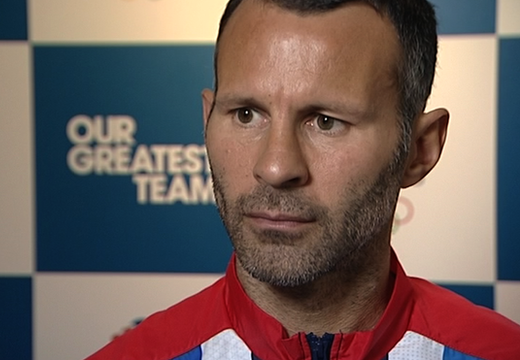 Manchester United midfielder Ryan Giggs has promised to make the most of appearing for Team GB at the Olympics after failing to make an international tournament appearance with Wales.

The 38-year-old made his Wales debut in 1991 but retired from international football in 2007 having failed to help his side to their first major tournament since the World Cup in 1958.

And Giggs, who has been appointed as team captain for London 2012, says he is relishing the opportunity to finally make his tournament debut.

"I didn't quite get to a major tournament with Wales, which will always remain a big disappointment," Giggs told reporters.

"But it is great to be involved in the tournament environment - I've not experienced that before. I have only been here a day but I am really looking forward to it."

The Welsh, Scottish, and Northern Irish football associations had been reluctant to embrace the unified Great Britain football team, citing fears over their ability to play as a separate entities in the future.

And, though five Welsh players were eventually included in the 18-man squad, none from Scotland or Northern Ireland were selected.

However, when asked about the politics surrounding the issue, Giggs chose to focus on football, saying: "All I have seen [is what is] in the press, really."

“As a player and a Welshman, I just wanted to be involved. Just like the Welsh lads involved, they're Welsh but we just wanted an opportunity to play for Great Britain in an Olympics on home turf so I think it was a chance we couldn't turn down.

"It was one we're excited about and if other people want to disagree with then that's their prerogative, but as a player I am excited and can't wait."

Giggs also addressed the absence of the his former United teammate David Beckham, who had been widely expected to be named in Stuart Pearce’s side after featuring heavily in the campaign to promote the Games.

"It is disappointing for David, obviously not being involved," he added. "As a friend I am disappointed for him but as a player you just get on with it and just try to enjoy the experience and that is what I am trying to do."