Giggs gets behind Scholes 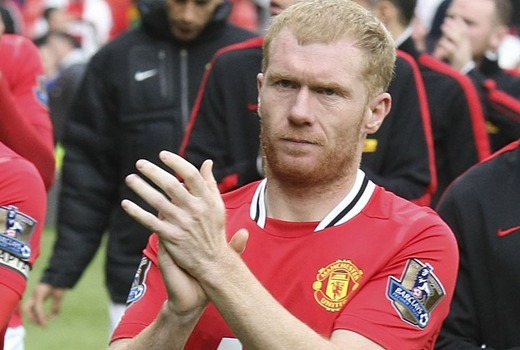 Ryan Giggs believes Manchester United team-mate Paul Scholes is unlikely to want to play for England again but feels if Roy Hodgson does coax him out of international retirement he will star at Euro 2012.

New England manager Hodgson will name his 23-man squad for the European Championship in Ukraine and Poland on Wednesday.

One of the main talking points in recent weeks has been whether the boss will attempt to tempt Scholesback into the England set-up after the veteran midfielder went on to have a successful half-season for United since returning to action in January.

Giggs thinks Scholes, who has extended his contract at Old Trafford until next summer, is unlikely to want to return to the international stage, but claims he will go on to star at the tournament if Hodgson manages to change his mind.

"I wouldn't hold your breath (about Scholes going to Euro 2012) but if he does decide to play and Roy Hodgson does decide to try and bring him out of retirement he'd be a great addition to the squad," added Giggs, who was speaking at the Premier League 20 Seasons Awards in London.

"In any team in any tournament he would shine.

"He and Xavi are the same sort of players. They just control the tempo of great teams. To do that you need to be a special player and that's what he does."

Meanwhile, United winger Ryan Giggs is excited about the prospect of representing Great Britain at the Olympics in London this summer.

Team GB manager Stuart Pearce can call three players over the age of 23 into his 18-man Olympic squad, with the likes of Giggs and former Old Trafford team-mate David Beckham still on his shortlist.

Red Devils' boss Sir Alex Ferguson has already ruled all of his over-age players out of contention with the exception of the 38-year-old Giggs.

Despite winning 64 caps for Wales, Giggs has never featured in a major international tournament and sees the forthcoming Olympics as the perfect opportunity to change that.

He said: "I'm on the shortlist and if I get picked it would be fantastic, I think everyone is excited about the Olympics coming to London and coming to Britain but obviously I'd have to wait and see if I get picked or not.

"It is obviously a tournament and I have never been involved (in any). It will be exciting, I've never experienced it so hopefully it will happen but we will wait and see."