Giggs delighted to finally make it to a major tournament 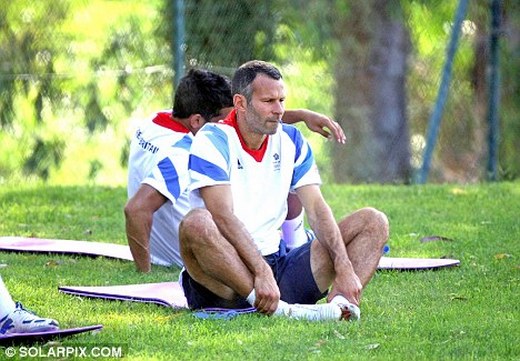 Even with a record 13 league titles and countless other high-profile accolades in his staggering trophy haul, Ryan Giggs insists his Olympic experience has already offered something new.

The 38-year-old Welshman has been named skipper of Team GB, who open their campaign in the familiar surroundings of Old Trafford when they take on Senegal on July 26.

For Giggs, it will finally fulfil the dream of appearing in a major tournament.

English football's most decorated player never got closer than a couple of near misses with Wales.

And as part of that famed 'Class of 92', it hurt to spend his summers watching when David Beckham, Paul Scholes, Nicky Butt and the Neville brothers were part of the action.

Now he is experiencing it for himself. And, after a week in Spain, he already sees the differences.

'My career for my country has obviously been the total opposite to the one for my club,' said Giggs.

'I've been so successful with United but not so with Wales.

'I would always watch the other lads, especially those ones I grew up with, go away on international tournaments and wish that I could do the same.

'Unfortunately I never got the chance.

'But now I have even in the first few days together I've seen things that I haven't seen in my career.

'It's been an eye opener, and really enjoyable as well.'

And, unlike those who have rejected the tournament, purely on the basis of the British aspect of a sport traditionally split across the Home Nations, Giggs insists victory would rank alongside anything he has won before.

'Right up there,' he said. 'I don't like to prioritise medals because every single one means something special.

'But of course, this would be different because you never thought you'd be competing in an Olympics. To win a gold medal would be special.'

Giggs will be asked to supply valuable experience as an over-age player.

Yet the brutal truth is that Jack Butland has seen more of what goes on at a major tournament.

Some believe it would have been so different if Giggs had followed the route of his schoolboy career, when he turned out for England, in the misguided belief that path was open to him.

'There was a lot of confusion about the situation because I played for England Schoolboys,' he said.

'Then because of the problems England had on the left of midfield, people would say to me you should have chosen England.

'But I was never able to choose England. Being asked is not something that has bothered me. You just try and explain as best as you can the reasons why.'

Finally, Giggs gets his opportunity, albeit not in the situation he might have imagined.

And before the competitive action starts, there is that little matter of Friday's friendly with Brazil at the Riverside Stadium.

The presence of United team-mate Rafael in the Brazil squad offers a familiar face for Giggs.

However, there is little doubt who the star attraction is; superstar in waiting Neymar.

'Neymar is one player that Rafa and Anderson have told me about,' said Giggs.

'They say he's something special. With the next World Cup being played in Brazil these players will be trying to impress, looking to put a marker down that they can play tournament football.

'It's great for the fans coming to Middlesbrough to see Brazil play live, purely because of the history they have in the game.'