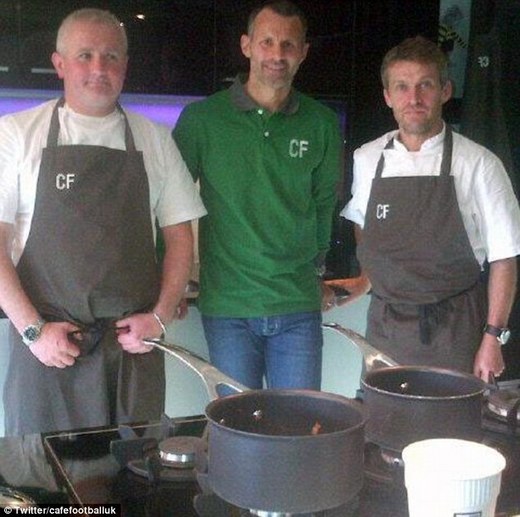 Gary Neville and Ryan Giggs have been serving Manchester United fans up with plenty of success and delight over the last 20 years on the pitch.

But now they are creating a recipe for a different kind of experience for the football faithful... a culinary one.

The United legends, Giggs still part of the playing and coaching side at Old Trafford, are launching 'Cafe Football', at Westfield, Stratford, with it due to launch in December. London bound: They weer used to lighting up the Stretford End at Old Trafford, but Stratford's Westfield will be the venue for the eatery It is the duo's first announced restaurant in the UK after launching their cafe and hotel brands in July.

The restaurant will feature footballing fancies such as a gourmet chicken and mushroom pot noodle, Pistachio Turf, and a Half-time orange like you've never seen it before.

'The food at Cafe Football will be a unique twist on all of the traditional match day favourites,' Giggs told the Evening Standard.

'We want it to be a place where guests can enjoy themselves while eating classic football dishes with a modern twist.' Delicious: The melting choocolate ball (left) and the fish and chip sandwich (right) In the kitchen: Giggs, who still playing and coaching at United, with chefs Michael Wignall and Brendan Fyldes

Mail on Sunday's Neville, who is a pundit at Sky Sports and a coach with England, insisted that this was just a new career for them, and they would be putting the same amount of care and effort into this as they have done football.

He said: 'Opening a restaurant is a huge step away from our lives on the pitch, but we are going to apply the same levels of enthusiasm and passion to make Cafe Football a success.'

The 140-set restaurant's prices will range from around £6 for a starter to £20 for a sirloin steak, and will create around 40 jobs. First venture: Giggs and Neville already have a hotel in place next to Old Trafford with their 'GG Hospitality' Empire: It will be a 10-storey, 139-bed hotel with a rooftop football pitch