Football greats get kick out of quick visit to HK 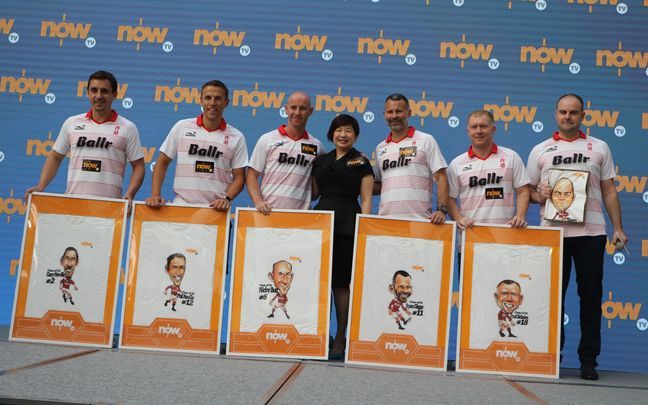 Hong Kong's a wonderful place, both before and after the handover, says Manchester United legend Gary Neville.

Neville, who arrived yesterday with four other members of the legendary "Class of 92" - Paul Scholes, Ryan Giggs, Phil Neville and Nicky Butt - made the comment at an event to kick off the group's global tour for a live fantasy gaming application, which connects fans as they watch live football.

Neville said it was interesting to see that many street names are still British while many of the colonial structures have survived.

"Hong Kong has been a big part of British history but we respect the handover 20 years ago," said Neville, who is now a football coach.

"Hong Kong is a wonderful place. We enjoyed coming before the handover and we enjoy coming since the handover. We enjoy that equally."

"They are very talented in general. If they are coached at a younger age and have the right mentality to be a professional footballer, you may see one or two of these players playing in Europe a few years later because they are physically fit and talented," Butt said.

On the future of Manchester United, Neville said he is hopeful of better times under manager Jose Mourinho.

"I think they will do well. I have never seen Mourinho disappoint," he said, while admitting their performance last year was quite disappointing.

When asked about Cristiano Ronaldo's possible return to Manchester United, Neville said it was still a rumor and did not believe the Real Madrid star would make such a move, though he would be happy to see it.

The "Class of 92" will leave Hong Kong for Thailand today after which they will visit Cambodia and China.

Snooker stars Marco Fu Ka-chun and Ng On-yee were at the event. United fan Fu said Scholes and Giggs were his favorite players. "I am so excited to be on the same stage with 'the Class of '92.'"