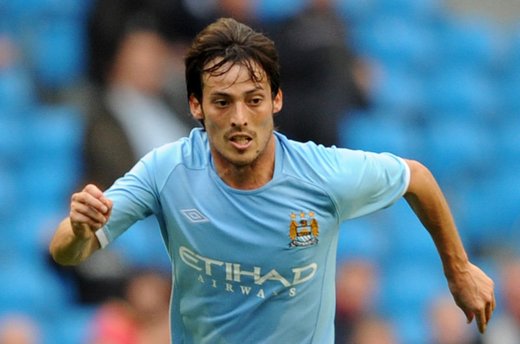 DAVID Silva thanks Manchester United rival Ryan Giggs for putting him on track to ­become a success in English football.

Manchester City star Silva and ­United legend Giggs may be separated in training by a few acres of old potato fields at their Carrington HQs.

But they are united by the art of yoga – the secret to longevity in a game of bone-jarring challenges.

Silva has followed Giggsy’s ­fitness routine on his DVD and has the same personal trainer, Sarah ­Ramsden.

The Spanish maestro is convinced that the ancient techniques are the key to him not only surviving in the rough and tumble of the Premier League – but hopefully stretching out to collect some major honours.

Giggs, 37, is enjoying his 20th year at the top and Silva is happy to tap into the knowledge of the most decorated ­player in English football history.

Silva, 25, said: “With so many games you have to play non-stop and anything you can find which helps you prepare for these games is good.

“I have taken up yoga with the same teacher as Ryan. It’s been another way of helping me stretch out after games.It’s helped me get back in shape.”

Silva, a World Cup and Euro 2008 double winner, has felt the full force of Premier League defenders since he joined City for £25million from ­Valencia seven months ago.

He may be one of the smallest players on the pitch at just 5ft 7in. But he’s head and shoulders above everyone else in silky left-foot skills.

Silva added: “You get people coming through the back of you in Spain, too, so I have got used to it. I don’t think the Premier League is more dangerous. But referees don’t blow for certain challenges. They let more things go in this country.

“People talk about my height. But football is not just a game for tall ­people, is it? It’s played by people of all sizes.

The main thing which has helped me settle in, relax and play good ­football is that I have felt at home.

“I’m enjoying it here and feel good that we’re not out of the title race yet. So while there is hope we will be ­fighting until the end.

“You can’t really put your finger on a period of time when City will be ­successful. We’re all trying to be that team and gradually we are getting close in terms of how people gel.

“It was absolutely great, though, that Carlos Tevez ­decided to stay. It can only be positive for us. He’s a big, big player who brings all kinds of things to the team.”