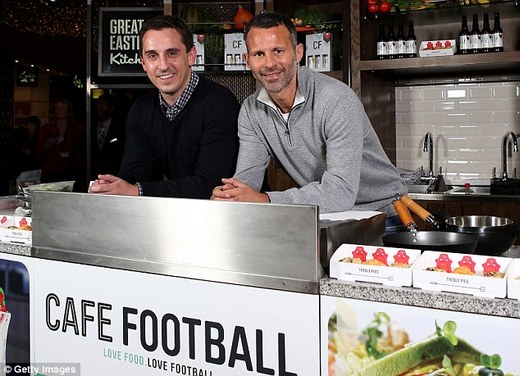 Don’t be fooled by the name, Cafe Football isn’t all fried breakfasts and red-top tabloids scattered across checked table cloths. In fact, it’s none of that.

Located a mere goal-kick away from the Olympic Park at the Westfield shopping centre, the debut restaurant of Gary Neville and Ryan Giggs should prove as much a winner with football fanatics as it does culinary critics.

For it is the food which is really on the ball. Stands up: Giggs and Neville's Cafe Football has a menu packed with puns and food stacked with flavour

Rather than rely on the draw of the 20-plus TV screens and lure of their famous names, the former Manchester United comrades have married substance to style and invested in their menu.

Venturing to the East London eatery with my other half - a sceptical soul whose expectations did not exceed a mince pie and Bovril (they are on the menu, by the way) - we were shown to ‘the best seats in the house’.

And it was hard to disagree, at least from my perspective - for positioned conveniently in front of me was a plasma screen showing night’s live action, albeit an FA Cup replay.

However, after a heated on-the-field discussion and quick change of tactics, my other half had her way and I was duly repositioned with my back to the television. Outside the box: Quirky winners on the menu include the Melting Chocolate Football and micro fish and chips

At least it allowed my full concentration on the quirky menu Neville and Giggs' team have devised.

Laden with footballing cliches - much like this review - it is nonetheless a fun take on the traditional format.

The kick-off replaces starters, the mains are in a 4-4-2 formation and terrace food - including Nev’s Noodle Pot - offers a down-to-earth alternative. The Wizard, meanwhile, is a Welsh lamb burger in honour of Giggs.

In the centre of the park they’ve got the Carne pizza - an uncompromising meaty offering which is perhaps a nod to Roy Keane. Getting underway with a Starting Eleven Platter (£14.95), we share chicken wings, rack of ribs, fish fingers and treble pies. And it is a spectacular start, the equivalent of racing to an early lead.

Still, though, there is plenty of time on the clock and my suspicion is their specialty may well be the comfort-type grub which had kicked us off. I am wrong.

To test their resolve I order the dish which takes its position at the head of their 4-4-2 system – The Aged Sirloin Steak (£19.95). Eat the pitch: Find Chocolate Turf, a chocolate and pistachio sponge is among the final whistle sweet treats

First to the chips, thinly cut and sprinkled with rosemary salt, you wouldn’t get these from a scran van outside the Stretford End.

They are the perfect foil to my medium-well cooked sirloin which, a bit like Neville himself, is crisp on the outside but soft on the inside. The Bearnaise sauce is a winner as well and I’m one satisfied punter as we enter the closing stages.

For the purpose of the review, I argue, I manage to thieve a fair portion of salmon from my partner’s dish and end up fashioning a surf ‘n’ turf bonanza on my plate.

And so into extra-time where desserts are a choice between ice cream or a pick from the Sweet Shop - a kiosk in keeping with the football-ground feel where we share the Melting Chocolate Football.

It is as it sounds, a delicious sphere of hot chocolate which sees us through to full-time in style. The post-match verdict then?

Neville and Giggs have obviously taken pride in the quality of the food on offer while the surrounds are in keeping with a football theme.

The atmosphere, a bit like Old Trafford for away teams right now, is also warm and welcoming.

And so it is that this reviewer scores an easy three points for the United legends.