Beckham inspired by Giggs and Scholes 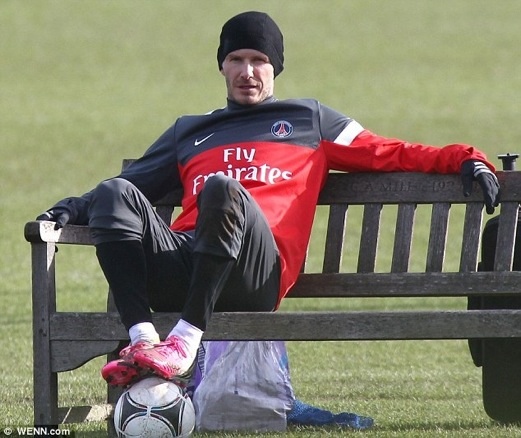 David Beckham says former team-mates Ryan Giggs and Paul Scholes are the example he wishes to follow as he prepares for a bit-part role at Paris St Germain.

The 37-year-old made a surprise move to the big-spending Ligue 1 club on transfer deadline day last month, signing a five-month contract and agreeing to donate his salary to a children’s charity in Paris.

Manchester United legends Giggs and Scholes - both older than Beckham - are still playing, albeit on an occasional basis, and their roles are a template for the former England captain.

‘I might be able to create good things that happen off the field but on the field is where I want to be successful. I want to be a champion and I want to win trophies,’ he said.

‘That’s been my mentality all the way through my career. Your motivation never changes, once you have that motivation in you it continues throughout your whole life.

‘Players like Ryan Giggs and Paul Scholes at Manchester United, they don’t play every game but when they do play they are big influences in the game. So I am looking to do that to continue to be successful.’

Beckham has not played competitively since he left Los Angeles Galaxy at the end of the Major League Soccer season in December.

He spent a few days training with Premier League side Arsenal but expects it will take time before he is ready to make his Ligue 1 bow.

‘I feel pretty good, it will take me a couple of weeks at least to get up to speed with the rest of the team but I think I have always kept myself pretty fit,’ he added to Al Jazeera and Talksport radio.

‘I have taken time off and trained with Arsenal for a couple of days and once I get in with the team I don’t think it will take me long to get up to speed. But I want to get playing as soon as possible.’