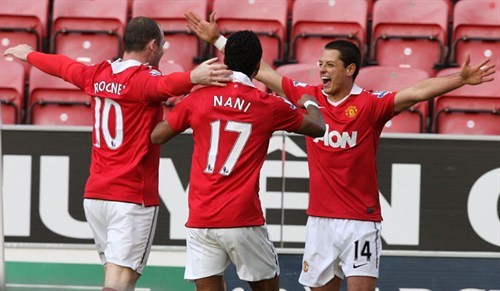 A goal either side of half-time from Javier Hernandez and late strikes by Wayne Rooney and Fabio da Silva settled an entertaining, end-to-end affair at the DW Stadium in Wigan on Saturday.

The victory, only United’s fourth away from home in the league this season, wasn’t as straightforward as the scoreline suggests, but restores the Reds’ four-point lead at the top of the table.

With United next in action on Tuesday evening at Stamford Bridge, Sir Alex’s men have a chance to stretch that lead to seven by the time title rivals Arsenal play again. And that gap could prove psychologically damaging to a Gunners side that haven’t won the league since 2004.

At Wigan on Saturday, Ryan Giggs and Michael Owen had been tipped to return, but neither was involved in the Reds' matchday squad. Sir Alex did make two changes from the side that drew away in Marseille during the week, though, with Paul Scholes replacing Darron Gibson in the centre of midfield and Dimitar Berbatov making way for Hernandez.

The home side started brightest and enjoyed plenty of possession in the opening quarter of an hour. Nemanja Vidic was forced into a fine block tackle on the edge of his area to deny the onrushing Charles N’Zogbia while Hugo Rodallega volleyed over the bar from 12 yards.

The biggest scare came on 13 minutes, when Victor Moses charged down a Paul Scholes pass and ended up clean through on goal with only Edwin van der Sar to beat. The Dutchman, in his 250th United appearance, stayed big to block Moses’ effort with his shoulder and keep the match goalless.

It didn’t stay that way for long, though. Two minutes later, Hernandez put the Reds ahead with a clever finish from close range after Nani fired a low ball into the six-yard box. The temptation must have been to hit the ball hard but the young Mexican, who’s scored in each of United’s four away wins this term, chose instead to deftly flick the ball over Ali Al-Habsi in the Wigan goal.

It was a terrific finish, albeit against the run of play, and United were again indebted to van der Sar when, within a minute of the restart, he dashed off his line and smothered James McCarthy’s effort.

On a patchy pitch, against the league’s 18th-placed side, the Reds may have expected a bruising battle at the DW Stadium. Instead, the two teams produced more goalmouth action in the opening 20 minutes than United fans experienced all evening in Marseille during Wednesday's bore draw.

But for a heavy touch on the edge of the penalty area, Hernandez may have netted again in the first half, while Nani rounded off a well-worked passing move by smashing a left-footed shot off the inside of Al-Habsi’s post.

Despite creating chances, Sir Alex’s men never looked in command. Every time Wigan attacked they did so in numbers and when the Latics lost the ball they pressed United high up the pitch in an effort to win it back. Moses, Rodallega and McCarthy were particularly impressive and will no doubt have felt aggrieved trudging off at the break a goal down.

Just as they did in the opening period, Wigan flew out of the traps after the break. Left-back Maynor Figueroa stung van der Sar’s palms when he unleashed a rocket from distance, while Rodallega beat Vidic in the air to head goalwards on 50 minutes.

The Reds soon settled, though, and Nani, Evra and Hernandez all wreaked havoc inside the penalty area before Nani rippled the side-netting with a powerful left-footed drive. The Portuguese caused further problems on the hour mark when his shot was spilled by Al-Habsi. Rooney gathered the loose ball and laid the ball back to Darren Fletcher, but by the time the Scot could squeeze off a shot Wigan’s defenders had blocked the path to goal.

At the other end, Victor Moses skied a difficult chance, teed up after good work down the inside-right channel by Hugo Rodallega, and substitute Franco di Santo’s effort was ruled out for offside in the move’s build-up. That’s as close as the home side came to piercing the Reds’ defensive line. All the remaining goalmouth action took place at the other end.

Hernandez wrapped up the points on 74 minutes when he and Rooney combined brilliantly 35 yards out to play the Mexican in on goal. With only the goalkeeper to beat, he kept his cool to net his second of the match and 13th goal of the season.

Ten minutes later it was 3-0 after Dimitar Berbatov ran onto a long Darron Gibson pass, advanced towards goal, drew Al-Habsi and unselfishly rolled the ball sideways for Rooney to tap into the empty net. There was still time for another, though, and young Fabio da Silva made it 4-0 with three minutes to play. Sent on to replace Nani, Fabio found himself unmarked at the far post and made no mistake from close range.

The final score was harsh on Wigan Athletic, who, for long periods, kept possession well and looked the likeliest to score. On another day, Roberto Martinez’s men may have come away with at least a draw.

Not this time. This was United’s day, and may well prove hugely significant in the title race.

Edwin van der Sar
The Dutchman’s had far quieter games when United have conceded goals. Against Wigan he had to be alert throughout and produced three fine stops.

John O’Shea
Kept busy in the first half by the impressive Victor Moses, O’Shea tackled and blocked crosses well.

Chris Smalling
Another impressive display by the youngster. Had to remain calm under pressure as Wigan’s forwards pressed the Reds’ back four high up the pitch.

Nemanja Vidic
Hugo Rodallega’s a tricky customer but Vidic coped well with the big Colombian. He also produced a vital tackle early on to thwart N’Zogbia.

Patrice Evra
A heavy knock in the second half curbed his attacking instincts somewhat but until then he’d looked dangerous, linking well with Nani down the left.

Darren Fletcher
The Scot asserted himself well on the game and relished the physical battle in midfield. He also delivered a number of dangerous crosses from the right.

Michael Carrick
Shielded the back four superbly and was often the first man to meet Wigan’s onrushing forwards. Also passed well and often combined with Scholes to keep possession.

Paul Scholes
Picked up where he left off in Marseille. Always looked to keep the ball moving and pick out men in advanced positions. A solid midfield display.

Nani
United’s main attacking outlet and the provider of the opening goal. Also peppered Wigan’s goal with a few shots of his own. Always a threat.

Javier Hernandez
Sir Alex’s assertion that Chicha’s one of the most natural finishers he’s ever seen is borne out with each game the Mexican plays. Took his chances superbly.

Wayne Rooney
Involved in an off-the-ball incident early on but gradually stamped his authority on the game. Not everything came off for Wayne but he’ll be delighted to have got on the scoresheet.

SUBSTITUTES
Dimitar Berbatov (on for Hernandez, 77)
Selflessly laid on Rooney’s goal when it would have been easy to go for goal himself.

Darron Gibson (on for Scholes, 77)
He played a key role in Rooney’s goal and mucked in as well in midfield.

Fabio (on for Nani, 85)
Took his goal – his first for the side – well and will always remember this occasion.