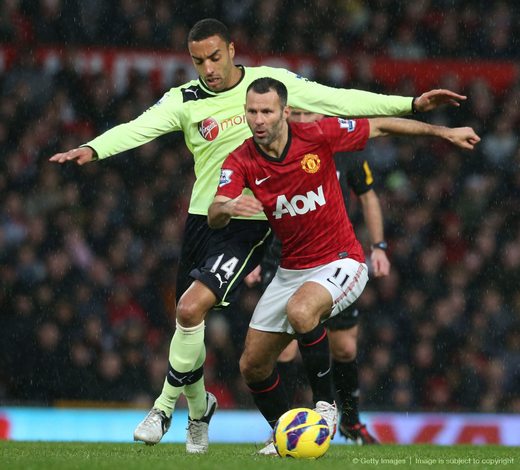 Sir Alex Ferguson admits he is running out of superlatives to describe Ryan Giggs after the 39-year-old rolled back the years again in the win against Newcastle.

The Welshman was a driving force as United collected three valuable points on Boxing Day and, such were his exertions, that he is unlikely to be available for the clash against West Brom on Saturday.

The Reds boss is puzzled by any criticism of his loyal servant and feels Giggs often defies belief with his longevity.

"How can you a criticise a player who has given you 20 years?" asked Sir Alex. "The problem for a player with Ryan's pride and experience is he probably wants to play more so he loses that game-play time that gives him consistency.

"At his age, I can't afford to risk that though. He was unbelievable in the second half. You have to say to yourself: 'How does he do it?'. I still wonder about that performance and energy. Dear me, it was quite amazing from him.

"I don't think I'll play him tomorrow simply because of the energy he spent on Wednesday night to help win the match for us. It is simply beyond  belief how you can criticise him. I don't understand it."

Meanwhile, Sir Alex feels his half-time discussion with referee Mike Dean has been blown out of all proportion in the press and he is upset to hear criticism from his opposite number Alan Pardew.

"I think Mike Dean handled it well," he stated. "He's an experienced referee and mature. There was no ranting and raving. I was demonstrative but I'm always demonstrative because I'm an emotional guy.

"Some managers shove linesmen onto the pitch and make a joke of it but I'm not making a joke of this. It was a serious decision and I think the [Jonny Evans own] goal should have been disallowed, I really do.

"I shouted him over and he came towards me. I wasn't on the pitch for more than three or four yards and I think it's been overplayed. Anyway, the problem for me and Manchester United is the profile of the club is huge.

"Alan Pardew came out and criticised me yet he is the worst at haranguing referees. His whole staff were at it the whole game on Wednesday. He shoves a linesman and makes a joke of it and yet he's got the cheek to criticise me. It's unbelievable and he forgets the help I gave him.

"Anyway, the press made a field day out of it and addressed every possible angle. The only one they left out is [speaking to] Barack Obama! The unfortunate caveat is I'm at the biggest club in the world not Newcastle, a wee club in the North East. I was demonstrative but not out of order. The press had a field day, it's as simple as that."