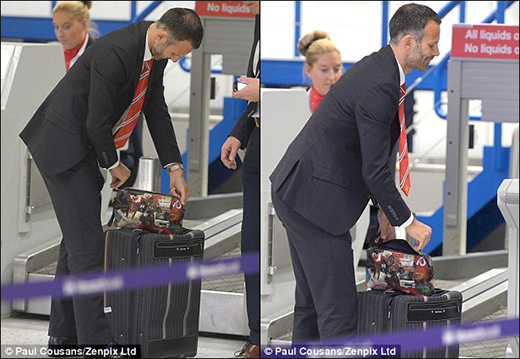 Manchester United stalwart Ryan Giggs has been at the top of his profession for over two decades, winning pretty much everything the game has to offer.

And ahead of his 40th birthday on Friday, the Welsh wizard proved he is still streaks ahead off the pitch, parading a rather swanky washbag as he departed for Cologne on Tuesday afternoon.

Manchester United face Bayer Leverkusen in the Champions League on Wednesday as they bid to secure their progression from Group A. 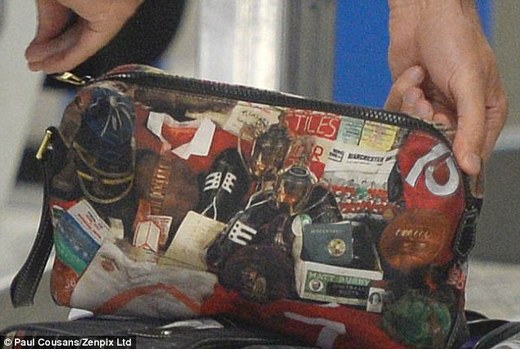 Bag it up: The toiletries holdall included iconic images from Manchester United's glorious past

And Giggs, along with his United team-mates, left Manchester showing off a toiletries holdall which was dripping in Old Trafford history - from George Best's famous No 7 shirt, a mention of World Cup winner Nobby Stiles, recently diagnosed with prostate cancer, and the Busby Babes.

Wayne Rooney, who has enjoyed a resurgence in form this season, was also in demand at Manchester Airport, as he was chased by a fan parading a No 10 shirt.

Giggs meanwhile, believes that United can bring home silverware this term despite enjoying an indifferent start to the season.

The Red Devils are seven points adrift of pacesetters Arsenal after 12 games.

Giggs told talkSPORT: 'We've got off to a disappointing start. The last ten or so games we haven't been too bad, but the draw against Cardiff is a game we should be winning, and we didn't do that.

'It's a crazy season, everyone seems to be beating each other and it's really only Arsenal that have showed consistent form, and they're up there and deservedly so.

'But we've been in so many title chases, and from our experience we know we've just got to hang on in there while we're not playing at our brilliant best, and hopefully the form will come in the turn of the year.

'As long as we're there or thereabouts in January and we get a run together, history shows us that the team that does that will have a great chance of winning the league.'