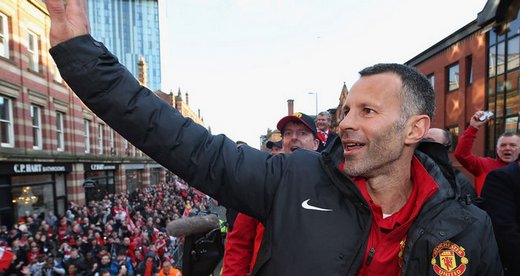 Manchester United great Ryan Giggs says incoming boss David Moyes will have the full backing of himself and the other senior players at the club.

However, Giggs agrees that replacing Sir Alex Ferguson, who has decided to retire after a trophy-laden 27-year stint, is a daunting task for Moyes.

Giggs told the Daily Telegraph: "What David Moyes is coming into is a good atmosphere, a really good bunch of lads, very good players and a really strong squad, so it is a strong position to be in.

"But the downside is that you have to follow the most successful manager that has ever lived.

"Managers usually go into clubs when things aren't going great, but this team isn't on a downward spiral, so I don't know if that makes it harder or easier for David.

"But we have a really good bunch of lads in the dressing room and, whenever the manager needs help, the more experienced players will help. That has been the norm, ever since I have been in the club."

Moyes has impressed during his long spell in charge of Everton and Giggs says his work at Goodison Park has earned him the respect of the United stars.

"He has done a brilliant job there and that is evident whenever you play against his teams, because it is never easy against them," said Giggs.

"Some of our former players have gone to Everton and been really successful, like Tim Howard and Phil Neville, and what they have said is that he works you hard and expects you to work hard and perform.

"He sets really high standards, but that is nothing different to what we are used to."

Giggs will play his final game under Ferguson at West Brom on Sunday and says it will be odd to work under a new boss next term.

"I have only ever known one manager at club level and I have been lucky in the respect that it has been probably the best manager ever," said the Welshman.

"I never thought I would outlast him, that's for sure. It is going to be strange and it's going to be weird next year.

"It will be an emotional one on Sunday, knowing that it will be the last time that he will be our manager."